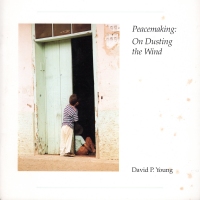 This book was published by some arm of the Presbyterian church at the end of history (which was right after communism fell in the Soviet Union, for those of you children too young to remember, before history clawed its way out of the grave and began shambling around and moaning again).

This is not supposed to be a pure poetry collection; instead, it’s said (in its introduction) to be a sourcebook for musing about interacting with the world, other cultures, and other faiths. So it includes some doggerel thoughts about different cultures, a lot of indictment of personal comfort and wealth while there are so many poor in the world, and, dare I say it, a lot more equivalence between the religions than I would expect from a book published by a Protestant church. The very first bit is about how Christians, Muslims, and Indians are all holy or something. Perhaps it’s meaningful to remember that all people are people, but if you’re going to be a church, I should expect if not an overt pitch as to why one’s particular flavor is the best then at least an implicit understanding that not all paths are the same.

But that sort of thinking probably explains why Presbyterian numbers are declining and little schisms are happening.

Ah, well. The book didn’t make me much more thoughtful about the poor. But it did have some colorful photographs.

Undoubtedly, I got this in a collection of chapbooks and whatnot from the Friends of the Springfield-Greene County Library book sale. Which is coming up next week just in case you missed my "Good Book Hunting" posts.