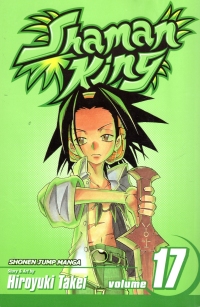 This book is my very first manga, and this book report is my first chance to make the joke Manga but pawn in game of life, although it could probably have used more setup. I wonder if anyone else has ever made that joke before; however, in lieu of researching it (I mean, searching the Internet for the phrase), I’ll just accept my primacy.

Well, this is the seventeenth volume in this particular story, so I’ve missed quite a bit. There’s a page of characters in the beginning and a couple of paragraphs of The Story So Far. So, the story: There’s a tournament of shamans in Japan. Every five years, they choose a shaman king, and there’s a tournament to see who it will be. There are a bunch of young sorcerors fighting each other to win; there are some alliances happening, and one of the boy’s father comes to teach something but first fights a couple of them. Then the bad guy allies of one come to fight the couple using dirty tricks. And then there’s a cliffhanger. To be continued in Shaman King #18. I think there are 36 in all.

This ain’t my bag, baby.

For starters, it was definitely odd to read from right to left. Undoubtedly, it is good for my brain to do strange things like that, but. Also, the influence of video games on the art and plots mean it’s full of interludes, combat, reflections on player stats (everyone goes on about one character’s 1,250,000 mana!), and panels that identify some power, attack, or spirit animal by putting it all in capitals amongst an explosion image. Also, the book contains numerable-but-why-count-that-high panels of character reaction shots where the startled characters say, “Huh?” I don’t know how many ways Japanese language has to convey this; maybe a bunch of subtle things have been simplified for English readers. Or maybe not. Maybe I’m not the target audience, either, since I’m not all about the comic art and gauge books on the words and plots. But I’m unimpressed.

I still have three or four of these to go through from my recent purchases, and I’ve been warned not to judge all manga from a single volume of some series, but I’m not that eager to jump into another one. Except they’re short, and I’ll be able to let my son look through them. So I’ll probably knock through the whole bunch by the end of the summer.