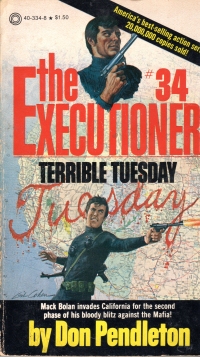 I know, I know, you’re quoting back to me what I said last week: “In 2015, I hope to finish more books, and as always, I hope to read a better quality of literature….” How does it explain that the last two books I finished were this book and Monday’s Mob?

I’m reading Julius Caesar’s The Gallic War, and after every book or half book, I take a little time to read from cheap paperbacks. As these paperbacks are shorter than The Gallic War, I’m finishing more of them as I read one piece of longer work. So there.

Mack Bolan, on the second day of the last week of his free agency, swings out to California at a tip from Leo Turrin and stumbles into a plot of the new California Concept. A group of retired mobsters and the remnants of Bolan’s previous visits have gathered in a plan to build the world’s foremost data and electronic signals interception facility to gather as much information as they can for their nefarious schemes, and it’s up to Bolan to stop it.

Man, what a world that was where the plot of men’s adventure novels involved the mob doing this sort of thing. In the 21st century, it’s the government doing it, and the electronic and wireless transmission of information is much greater.