We like to save a little money, or enjoy the illusion thereof, by buying refill bottles of window cleaning products at the local warehouse club store. However, each of the refill bottles comes with a spray bottle of its own as though you were that excited about the product that you were going to try it for the first time and buy a bunch of it.

And, being as I am, I can’t throw out a perfectly good spray bottle especially since there’s likely to be a small amount of cleaning agent in the bottle and I have the means to refill the bottle.

As such, we have six partially filled bottles of Windex in various locations throughout the house. 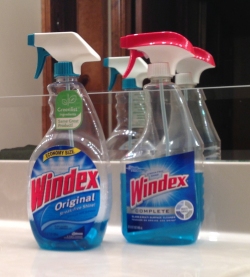 Including two in the master bathroom alone

Face it, I’ve got more Windex now than Nia Vardalos’s father. I’ve got enough freestanding Windex bottles that, if a hockey team showed up and wanted to do my windows and mirrors, they wouldn’t have to share bottles.

And the worst part?

The more bottles I have to refill, the faster I have to buy another refill bottle…and its attendant new spray bottle.

They are working together and reproducing in their own fashion, people. Wake up before the Windex army makes its final assault!