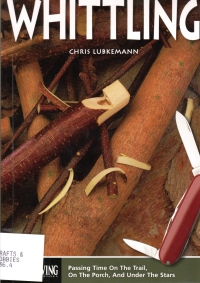 I live in the Ozark mountains now, and I do own a pair of overalls. So why shouldn’t I start whittling as well? That’s what I thought when I saw this book at the library a while back. So I picked it up.

It’s about whittling, which differs from woodcarving proper. That is, the projects and techniques within this book deal with using a pocket knife mostly to cut shapes out of thick branches. It’s not about chiseling statues out of a block of wood. So the projects are short and, unfortunately, small. That’s where the real trade-off in artistry lies. Of course, this course could be a means to get you interested in it and leading to experiments with chisels and whatnot later.

As most of the things are trimmed from branches the less than an inch in width, you get a lot of long and thin things to carve. Backscrathers, forks, spoons, knives, and canoes. Also, some small figures and heads for walking sticks (or walking sticks themselves).

So I’ll be in the market for a pocket knife with appropriate blades for whittling and a good whetstone to sharpen them. I might give it a try, but I’ve been socialized in a world where just sitting and cutting a branch to pass the time isn’t a good way to waste time (writing blog posts for sometimes tens of readers a day: good way to pass the time). I’ll have to get a mindset adjustment if I’m to try it seriously. Which means I probably won’t.

But it’s an interesting book to browse never the less. Also, in addition to the projects and whittling, the book contains sidebars with camping tips, recipes, and other bits that fill out the rest of time outdoors hiking and camping in between your whittling.