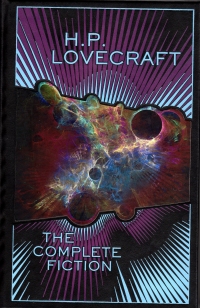 I can’t believe I read the whole thing.

This tome is one of the 1000+ page books I’ve been going on about reading for the last year or so. It actually took me over a year–something like a year and three months–to read this book. Short stories will do that–offer you the ability to stop after only five or ten pages in a night, where a longer work with longer chapters will at the very worst compel you to read maybe a dozen, and then maybe another chapter.

Then there is “The Dream-Quest of Unknown Kadath”. I’m not a fan of the Dreamlands portion of Lovecraft; I know he sometimes liked to dabble in the very fantastic, but part of the grounding in his stories is that the bizarre and dangerous happens to people in the real world. When we get into the Dreamlands stuff, where Randolph Carter goes through a series of adventures in his dreams, where the weird does not have the grounding in every day life or reality, I sort of lose caring. So when it came time to read “The Dream-Quest of Unknown Kadath”–which I had never read before–I had to slog. For weeks or months.

At any rate, if you’re a fan of Lovecraft, this book will please you (your Dreamlands mileage may vary). It includes all the fiction, including the longer pieces such as “At the Mountains of Madness” and whatnot. In college, I read a number of shorter paperbacks of Lovecraft’s work, each based on one of the cornerstone stories (“The Lurker on the Threshold and Other Stories”, “The Colour Out Of Space and Other Stories”, and so on). So many of the pieces were familiar to me, but many of the shorter, lesser stores either I had not remembered or had not read.

So all in all, it’s a great collection if you’re in the mood for Lovecraft. And sometimes I really, really was, and sometimes I was not. His archaic style sets a certain gaslight feel to the stories that you cannot get elsewhere, and the language will teach you many neat words. In my twenties, I learned the words “foetor” and “eldritch” from Lovecraft, and I started keeping a list of words I wanted to drop into conversation. However, I misplaced that notebook eight months ago, so I don’t know what words I wanted to learn, and I didn’t learn them very well before that. Ah, well.

In addition to his fiction, the book includes some short stories he wrote as a kid and draft portions of “The Shadow over Innsmouth” and Lovecraft’s nonfiction essay “The Supernatural in Literature” which explores the history of what he calls the “weird” in literature up until his present day (the 1930s). He name-checks a lot of authors throughout history and identifies works he likes. It’s a fifty page treatise, and it at turns made me want to read some historical Gothic fiction and bored me. He lavishes praise on Algernon Blackwood, though, and the complete tales of Blackwood is one of the few books I’ve actually put down with the intention of not picking back up, so I will probably avoid the authors he mentions except Lord Dunsay and maybe Machen. Or not.

This is less of a book report than marking my achievement. Sorry.