What is Herb Alpert’s favorite glass?

One might respond a glass of Tequila, but no: 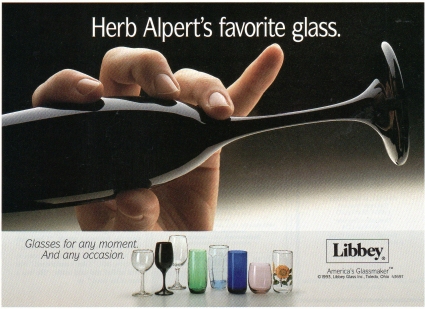 This advertisement is from 1993, and, forgive me, I associate Herb Alpert with the 1960s and maybe the 1970s because of his prevalence on LPs. Most of my Herb Alpert LPs are from the early years (The Lonely Bull, Going Places, What Now My Love, S.R.O., Sounds Like, and Warm means I own most of his 1960s catalog and nothing after), so you can understand why I am sometimes taken aback when I realize he has continued releasing albums even to this day.

Which is why in 1993, he would still be a relevant pitchman, although I would have expected to see him selling Reddi-Wip.

Libbey, his favorite glass, is also still still in business, although its magazine advertising campaigns seem to have fallen off.