As we previously mentioned, the United State Census Bureau has declared 81% of Americans live in urban areas, and the Census Bureau considers for statistical inflation purposes any town greater than 2,500 to be “urban.”

Aurora has a population of 7,406 according to the signs at the edge of town:

The map of Aurora shows the city’s development. It began as so many Southwest Missouri gritty urban clusters do: along the railroad, followed by some growth toward the US Highway that came later: 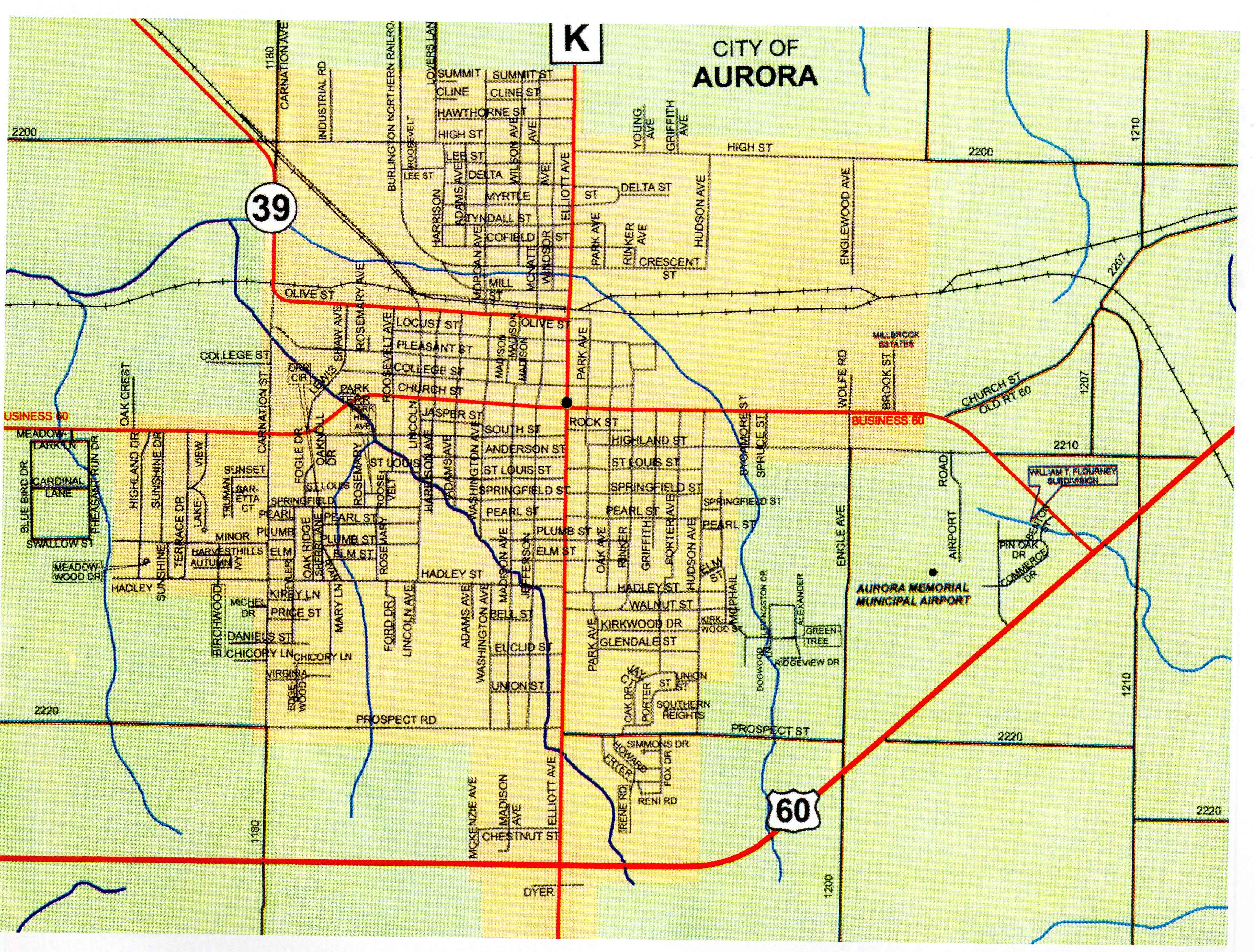 When Aurora was young, locals discovered galena ore, and the strike drew others to the area to prospect. As the mining boomed, they also found lead and zinc, which lead to the rapid growth of Aurora in the late 19th century. Aurora even had electrical service in 1897, which is fifty years before some of the more rural areas in the state.

The old section of Aurora just south of the tracks features a number of shops tightly pressed together, some in original buildings from the 19th century. And, yes, the parking is nose-in:

This downtown area is in a period of revitalization that’s a decade old. Unfortunately, that means that many of the initial businesses that were part of the revitalization have closed or moved on. But it still sports a barbecue restaurant, a coffeeshop, an Pan-Asian-looking family grill, and a microbrewery for your dining pleasure (at least, your evening dining pleasure–I didn’t see a greasy spoon downtown for my omelet).

As its downtown, old town region boomed when it did, it’s several square blocks of buildings pressed cheek to jowl. This contrasts with other towns that grew up later, such as Republic, whose downtown area is smaller, but its population is greater.

Old Aurora boasts some of the earmarks of a gritty urban area, including flying rats: 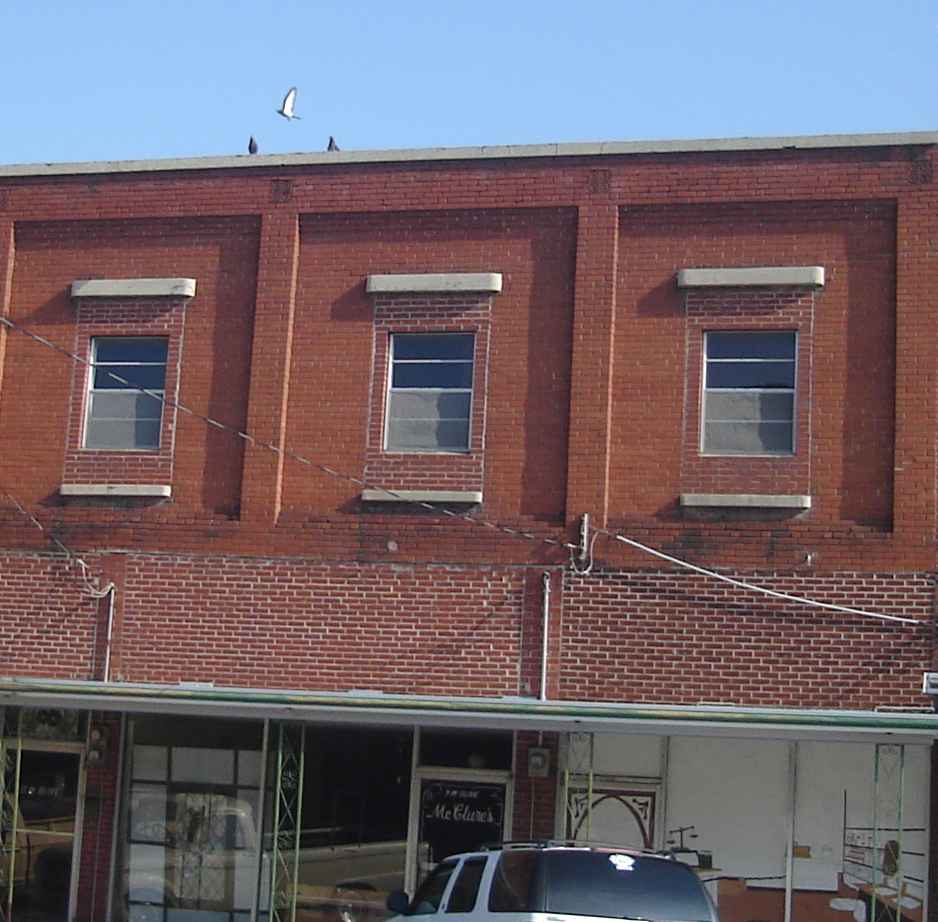 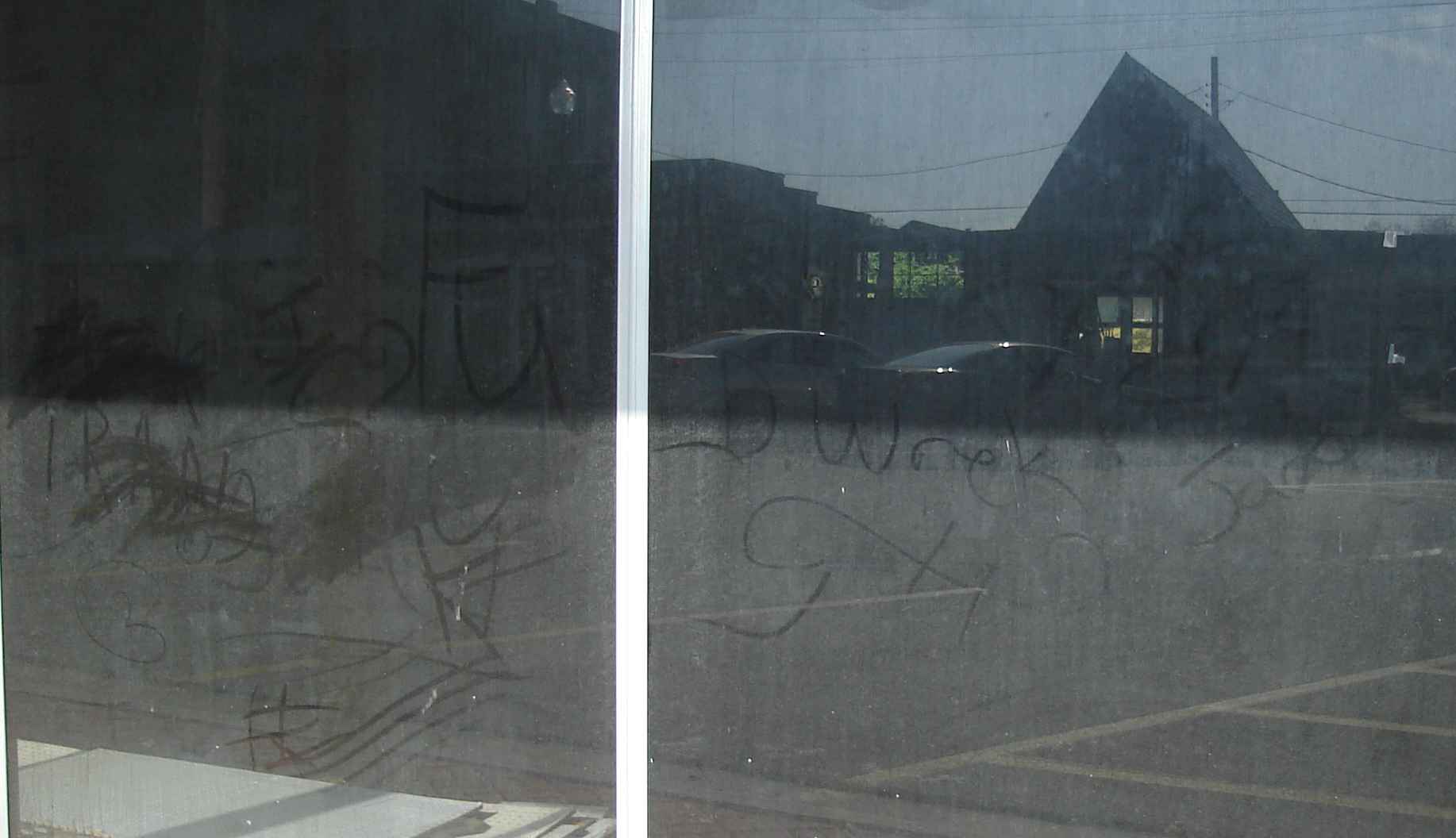 Aurora has its own newspaper, the Aurora Advertiser: 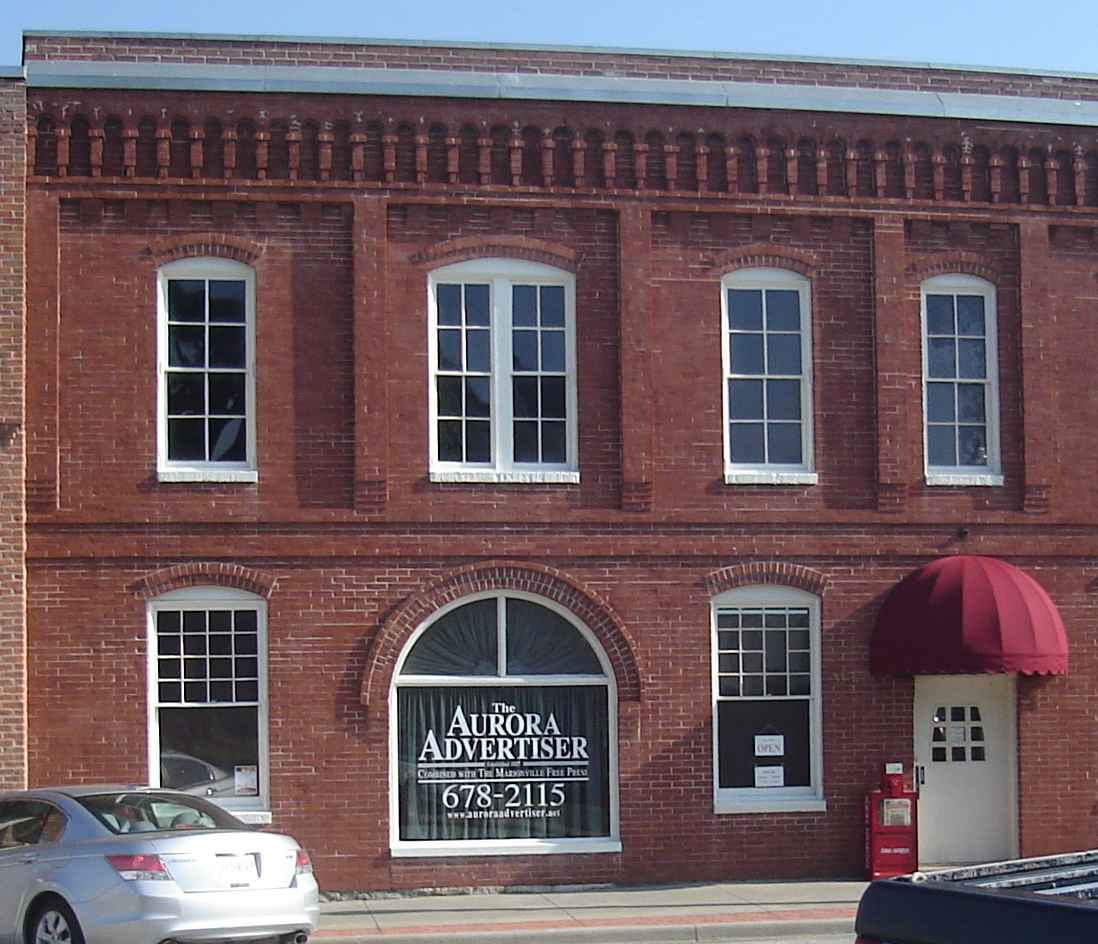 It’s hard not to imagine Cary Grant and Rosalind Russell behind those walls. Strike that if it sounds condescending; I’m partial to small town papers and have the greatest respect for the people who put them out as a labor of love more than commerce these days.

Aurora’s City Hall is a stately affair that you see in older city halls: 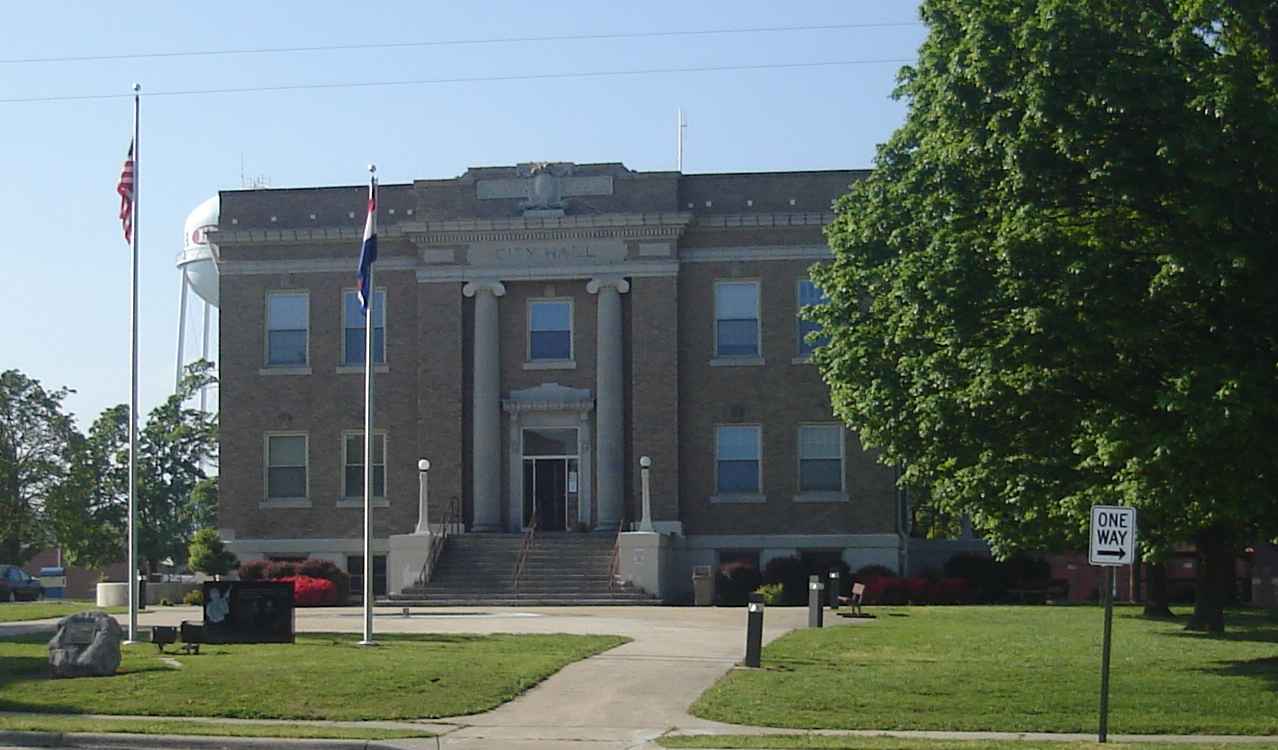 Contrast that with your new suburban city halls, which are jammed into strip malls or nondescript buildings. In the 19th and early 20th centuries, townsfolk took pride in this civic show. Now, they don’t want to spend the money on it. I can understand it, but its effect saddens me a bit. 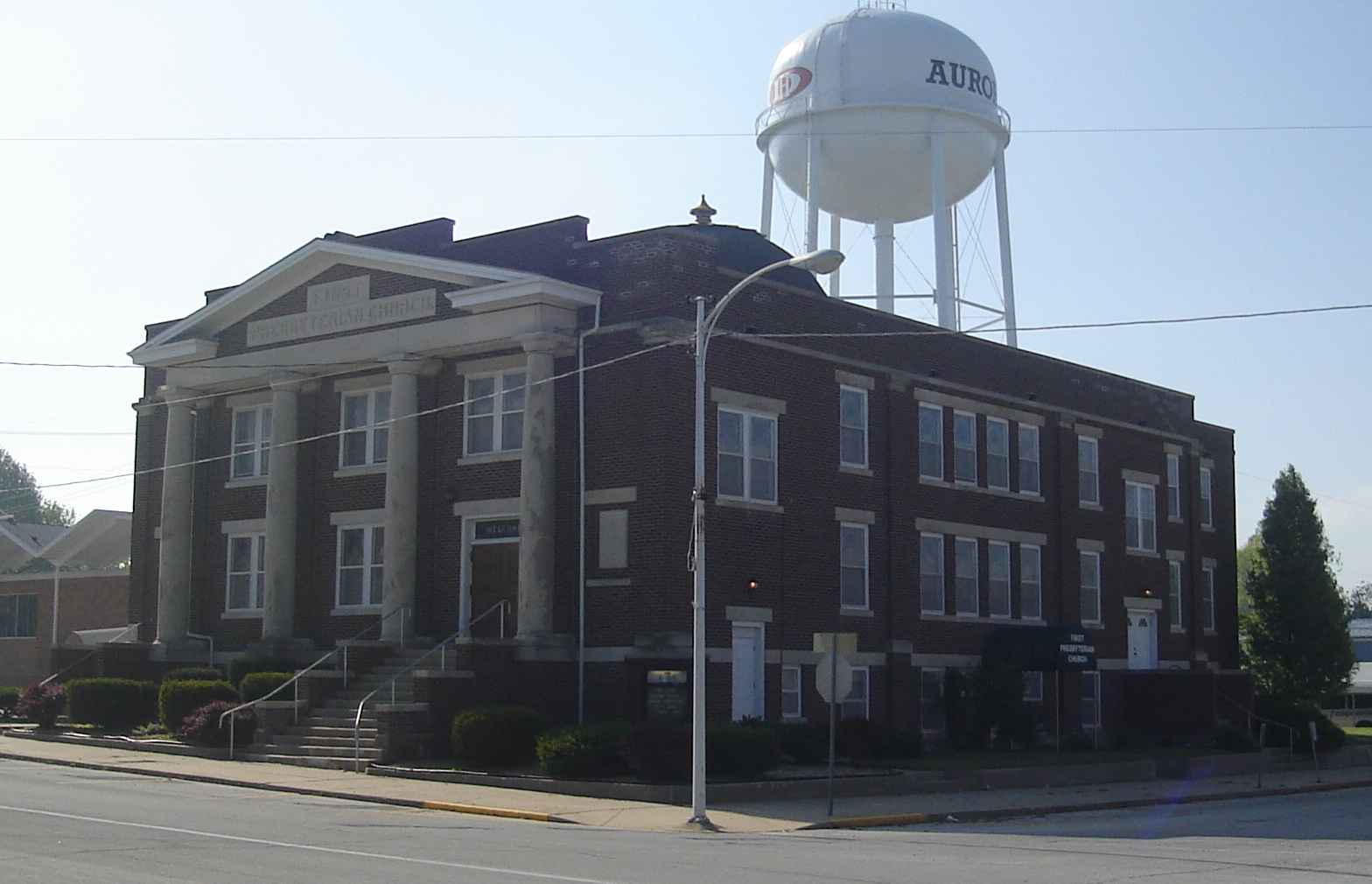 Again, that’s something nice to look at. Better than a Quonset hut.

Aurora had a movie theatre at one point:

The cars in the front indicate activity, not patronage. The former cinema will be the new home for the Church on the Rock, who bought the cinema for $27,000. Workers are busily renovating the structure.

Local business owners are happy with the fact that the cinema will be in use, but I would in my perfect world have seen this structure renovated as a small performing arts venue, a la The Focal Point in the St. Louis area. Small enough that you can book local and regional acts into the structure and survive with whatever small gate you can draw. Again, a labor of love, but my business sense runs toward the labor-of-love instead of the sound-business-plan, which is why I am a blogger and not a real estate mogul.

Local business hours downtown do not reflect the bustle of an urban area: 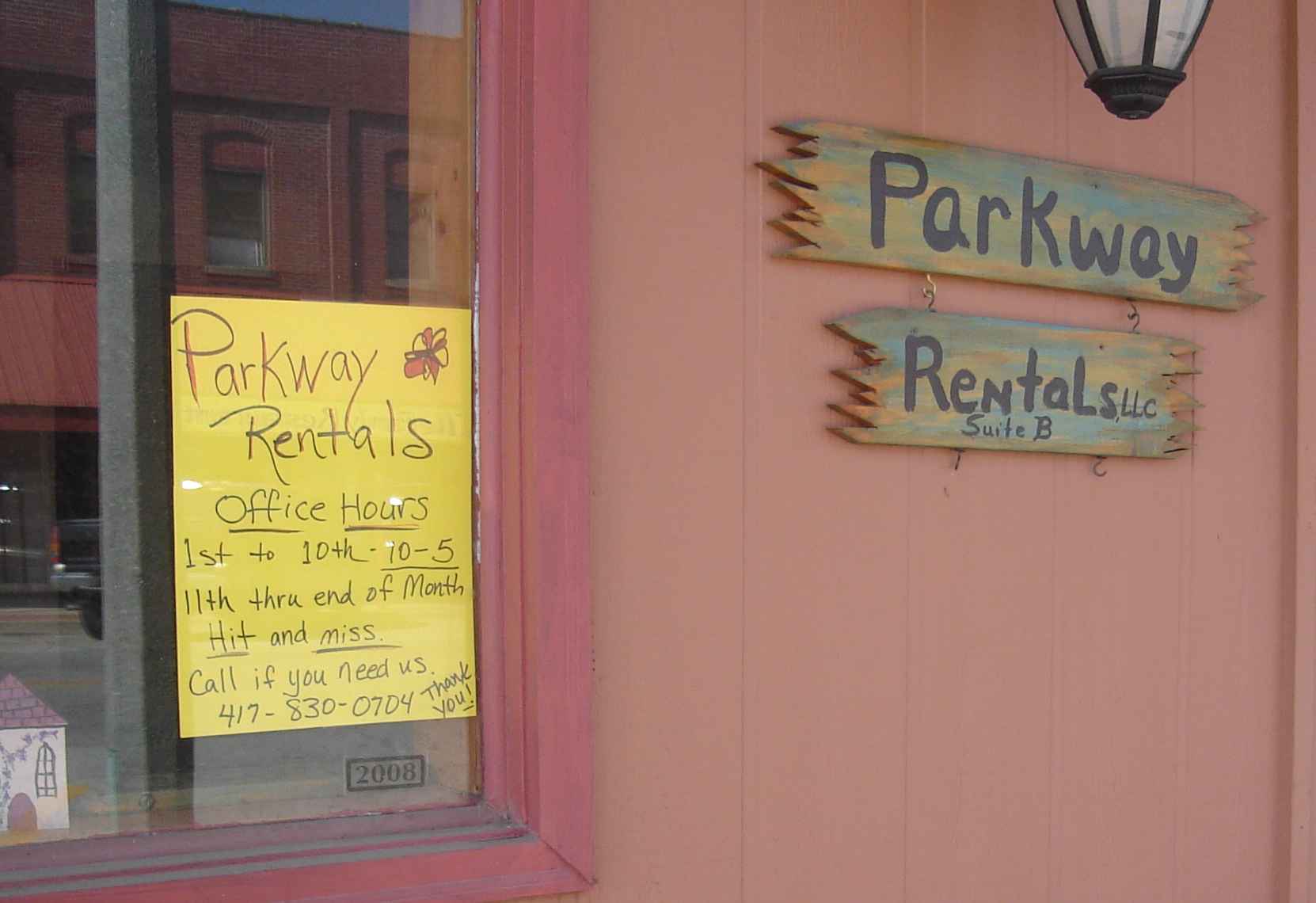 As I said, the downtown area has some businesses, but a lot of empty office space. There’s even one burned building hidden behind a fence with obvious fire damage on the vacant building next door. I hope Aurora’s old city can get it back together without government investment and giveaways. The property sale prices aren’t expensive as it is.

On the corner of Olive and Elliot, the old station house has been converted into the Chamber of Commerce office and History museum:

The small facility has a foyer, an office, a meeting room, and a small one-room museum with artifacts from Aurora’s past. I bought a copy of Aurora’s centennial book for $10, and I’ll tell you more about it when I read it. The museum probably caters mostly to locals who know a bit about the local history already, so we did not linger long.

Just outside the downtown area, one finds a residential area with normal houses and whatnot. But Elliot Avenue features some very nice houses indeed: 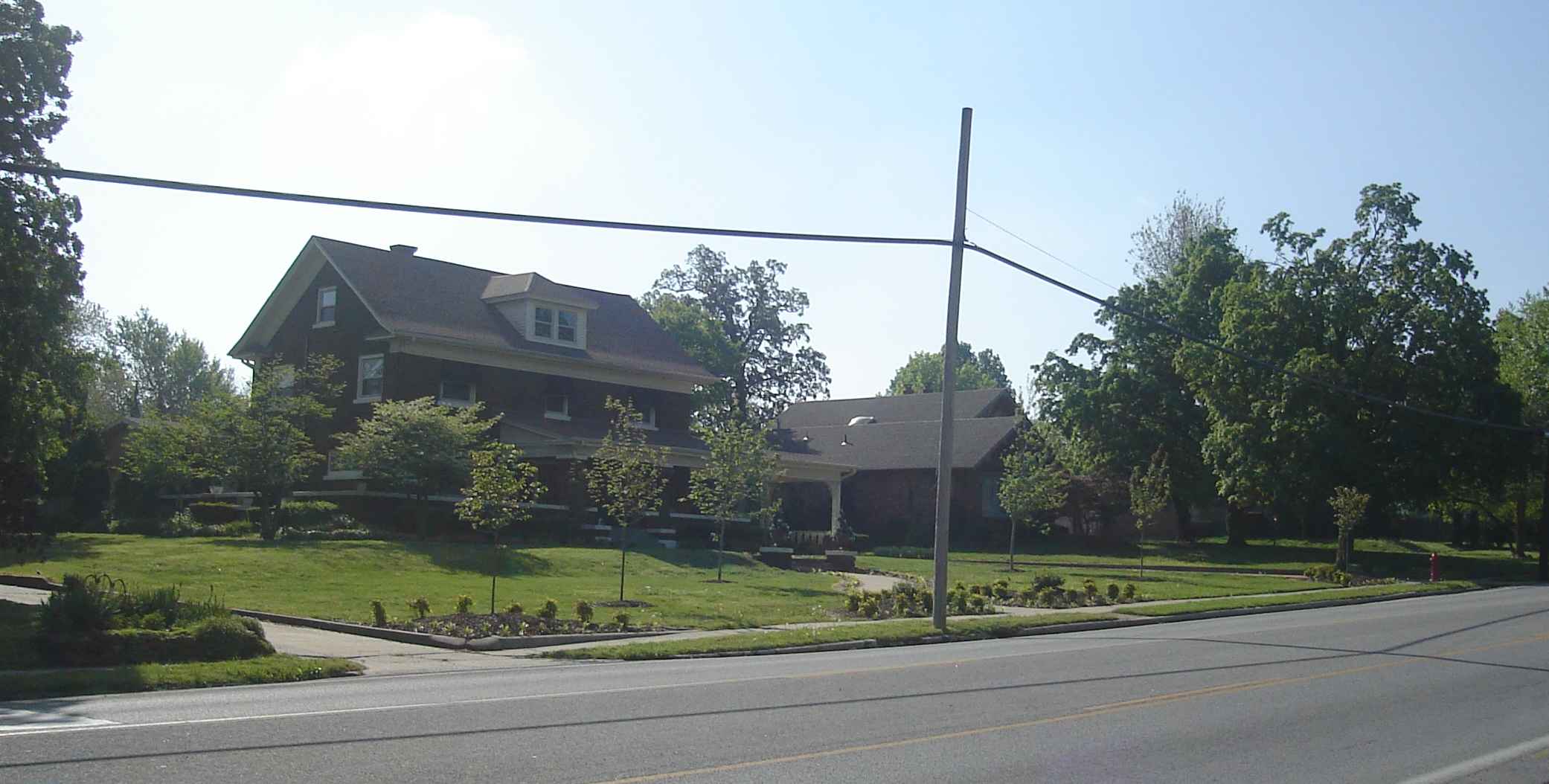 Once you get out of the old Aurora area, it becomes more 20th century in its make-up. Along Church Street and Elliot Avenue (US 39 outside of town), you have a Pricecutter grocery story, a couple of chain restaurants, and a Walmart where 39 meets 60. North of Church Street (Business Loop 60), there are a couple of smaller independent grocery stores, but for the residents’ sakes, I’m pleased to see the Walmart and the Pricecutter.

It’s not the only hardware store in town, as there’s a Sentry Hardware up on Olive.

After a morning of exploring, we finished with a breakfast/lunch at the Aurora Family Restaurant on Church Street, not too far west of the Municipal Aurora Airport. I had the Missouri omelet, and my assistant had a grilled cheese and jelly sandwich with pickles and jelly (his own creations, not on the menu). The omelet was good, comparable to what you find in family restaurants across the country, except this variation was loaded with most types of meat you can find on Earth.

It was a nice town to visit, and I don’t think I’d mind living there.

It also gave me the following additional bullet points to indicate you might not actually live in an urban area:

1 thought on “A Photojournalism Study of Urban Aurora”