Move over, New York City. Nine of the 10 most densely populated areas in the U.S. are out West, and eight out of 10 Americans are now urbanites, a U.S. Census Bureau report released Monday shows.

However, like the recently trumpeted “Chocolate leads to weight loss” study that’s gotten a lot of brief mentions by radio personalities in between their shallow playlists and brief Internet mentions, looking behind the headlines will reveal something that pretty much contradicts the headline.

In the chocolate study, it was the fact that everyone in the study was exercising 3.6 times a week (more than I do, certainly).

In the Census Bureau study, it’s the definition of urban:

The census data identifies two types of urban areas: “urbanized areas” of 50,000 or more people and “urban clusters” of at least 2,500 and less than 50,000 people. There are 486 urbanized areas and 3,087 urban clusters nationwide.[Emphasis added.]

You know what we call an urban area of 2,500 people in the real world? A small town.

But going by the Census Bureau’s definition, ladies and gentlemen, here is the gritty urban world of Republic, Missouri.

For reference about Republic, visit the city Web site or Wikipedia, which gives its population as fourteen thousand and something in 2010, which makes it five times the size of the smallest urban enclave. It lies ten or so miles outside the southwestern tentacle of Springfield, Missouri (a tentacle required by the magic of urban planning that put a city-owned power plant where the city people wouldn’t complain about it).

Those are ten rural miles, which are different from urban miles. When I lived in the St. Louis area, my home in Maryland Heights was 22 miles from my mother’s house in Lemay, but riding down Interstate 270 amid the suburban developments differs from riding ten miles surrounded by pasture and farms. Trust me.

Republic is enough of a town in its own right (although it’s a city by the government definition) that it draws people from outside Republic to its shopping environment. It’s far enough from Springfield that some of its residents are commuters to the larger city, but it’s not a suburb. It’s a city with its own history that I won’t go into now. 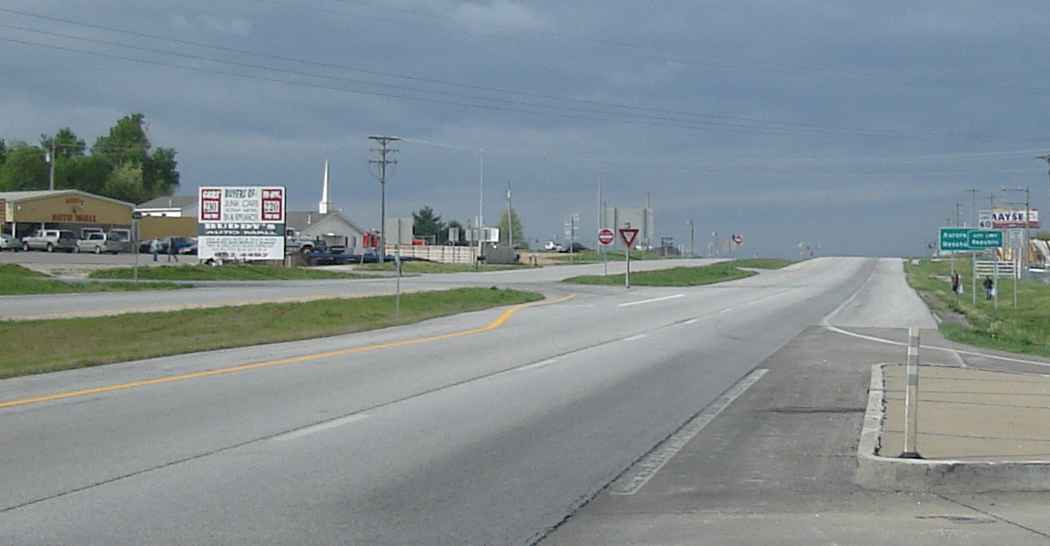 This is the Republic city limit at the north end of Highway 60 at James River Freeway. It’s only a couple minutes outside the western fringes of Springfield here, as Republic annexed Brookline and these parts in the recent past. Highway 60 is highly developed further south, with a Lowes, Walmart, banks, and car dealerships just east of the old downtown area, but up here it’s still pretty sparsely populated.

Republic does have another commercial lane. Here’s Commercial Lane near the intersection with Farm Road 164:

Those two white bumps in the distance are a distribution warehouse some miles off. 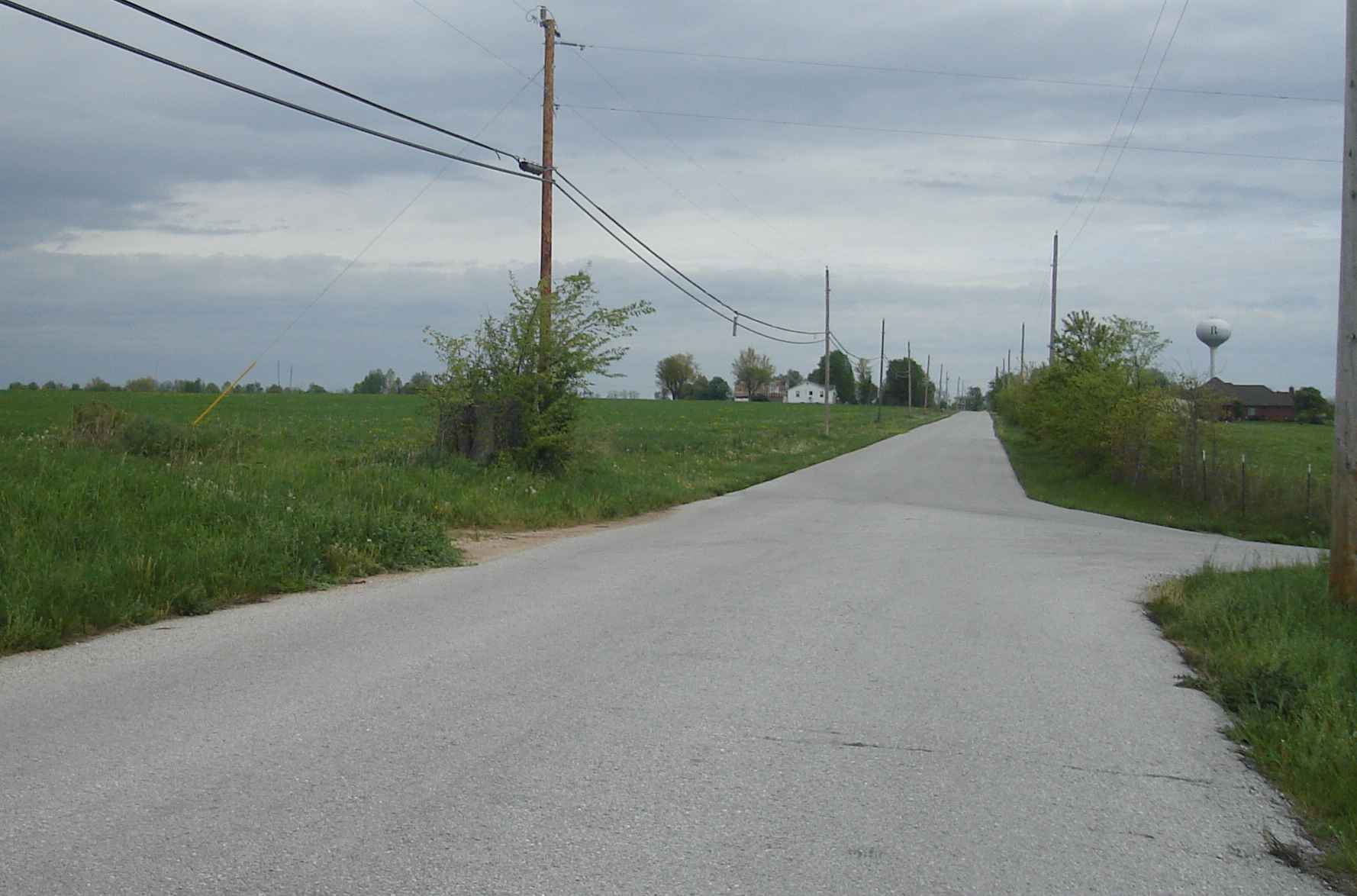 This is looking down Commercial towards the two homes on it before it curves and recurves into Brookline proper and passes Brookline Volunteer Fire Station #1. Where Washington Avenue (the name of Commercial Lane after a couple of curves) meets Highway MM, you find the post office that serves Brookline and Republic (and Battlefield, and other parts of Greene County):

It’s a two-room cinderblock building where one of the rooms is a lobby and the other half loads mail for our rural postal carriers. I’ve been in on occasion. Nadine is always friendly, giving my child leftover stickers or stamping his hand SPOILED. What, your post office has more than one clerk? That, my friends, is urban.

At any rate, I was driving into Brookline to vote today. I drive twenty minutes at highway speeds to get to my polling place, checked once by a stop sign and twice by traffic signals. I filled out my scantrons and stepped out of the polling station, a Republic Fire District station (professionals, although part of the near parts of Republic including my domicile are covered by the volunteers).

Here’s what I saw from the doorway. Forgive me for not stitching them together for you: 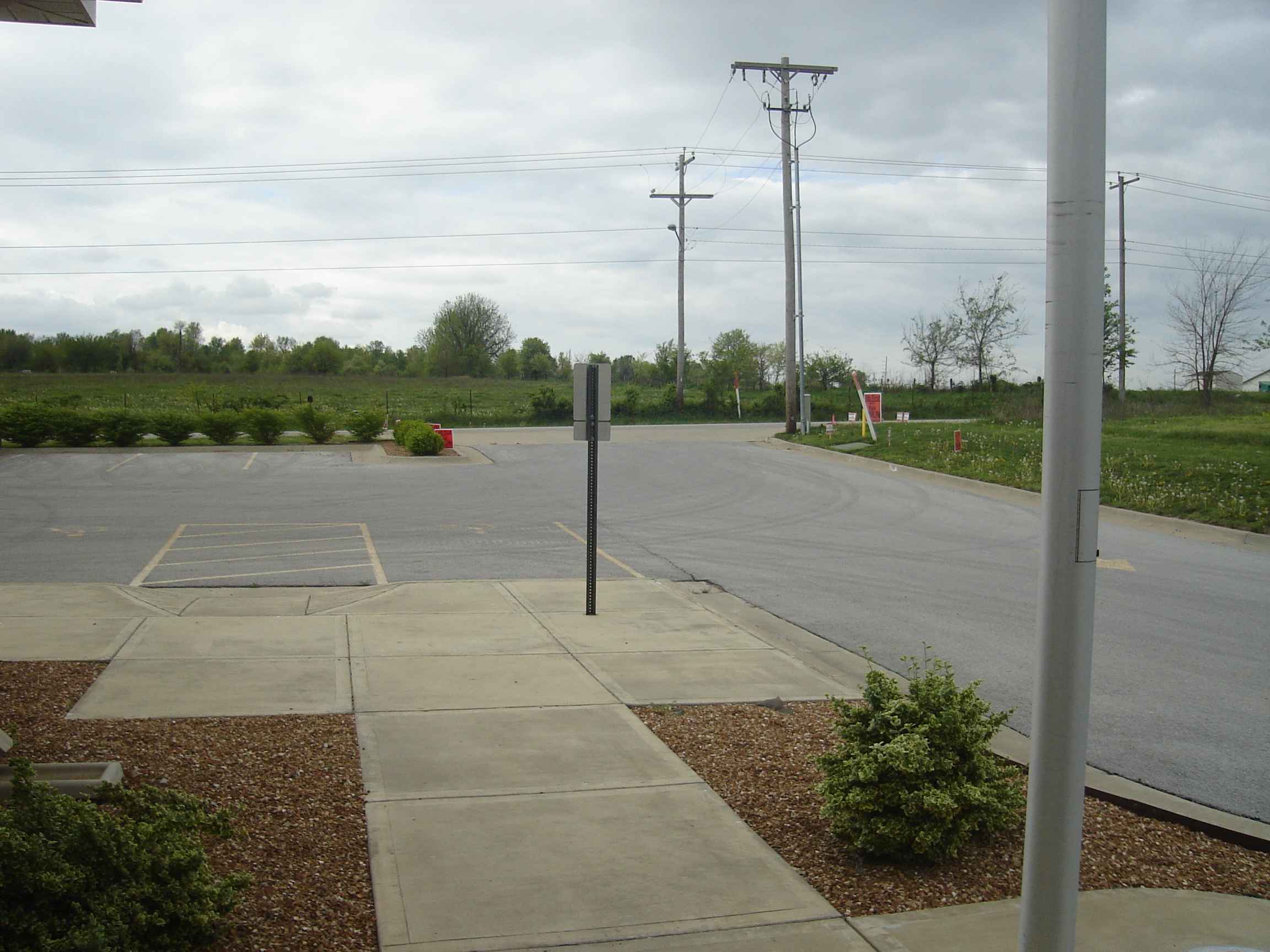 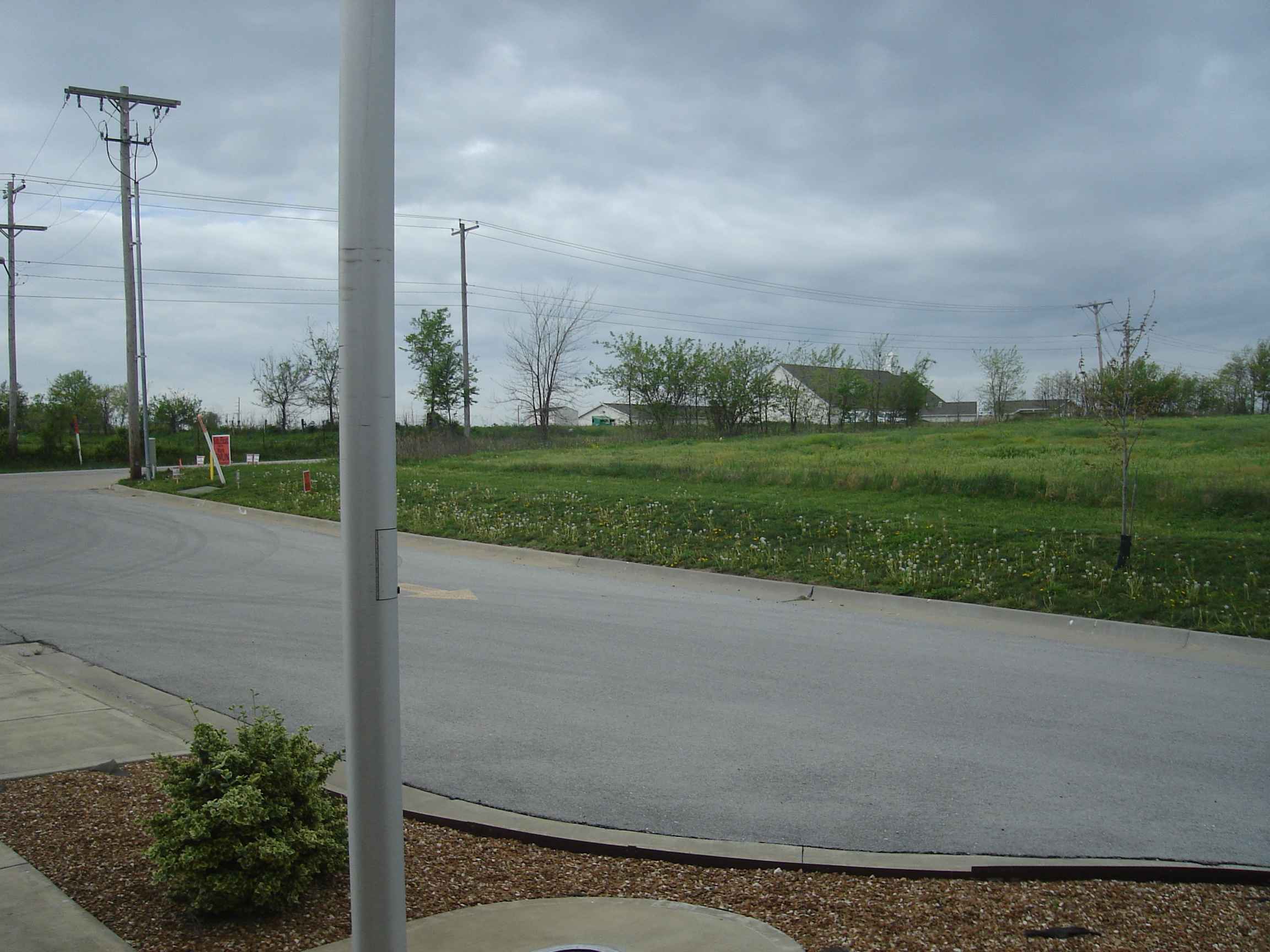 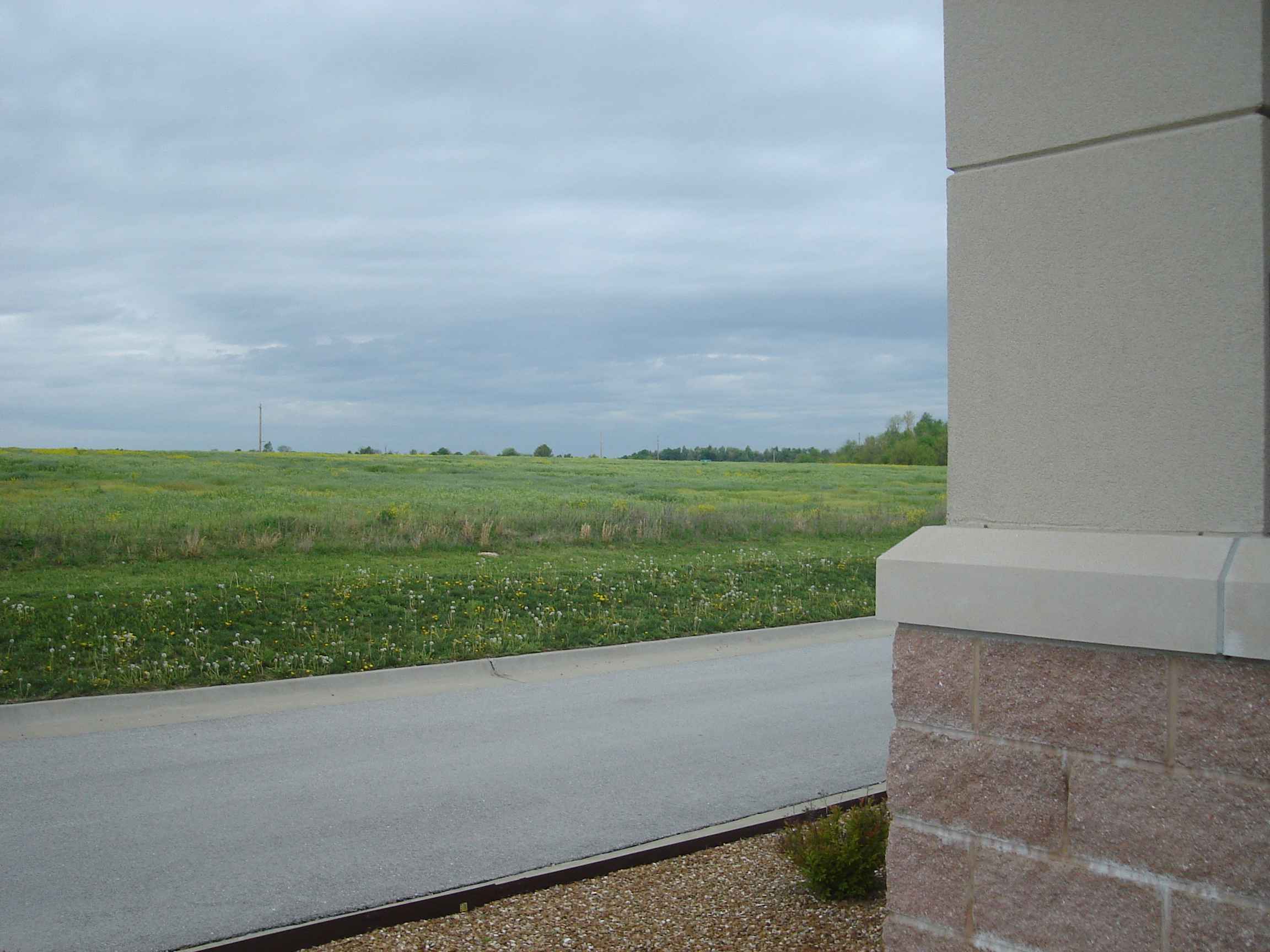 The only thing in sight is a Church of Christ.

Now, that’s not to say Republic doesn’t have residents. It has some subdivisions, and just west of Highway 60, it has its downtown. Which was a downtown before the highway got built up. Downtown features a couple of shops and the municipal offices: 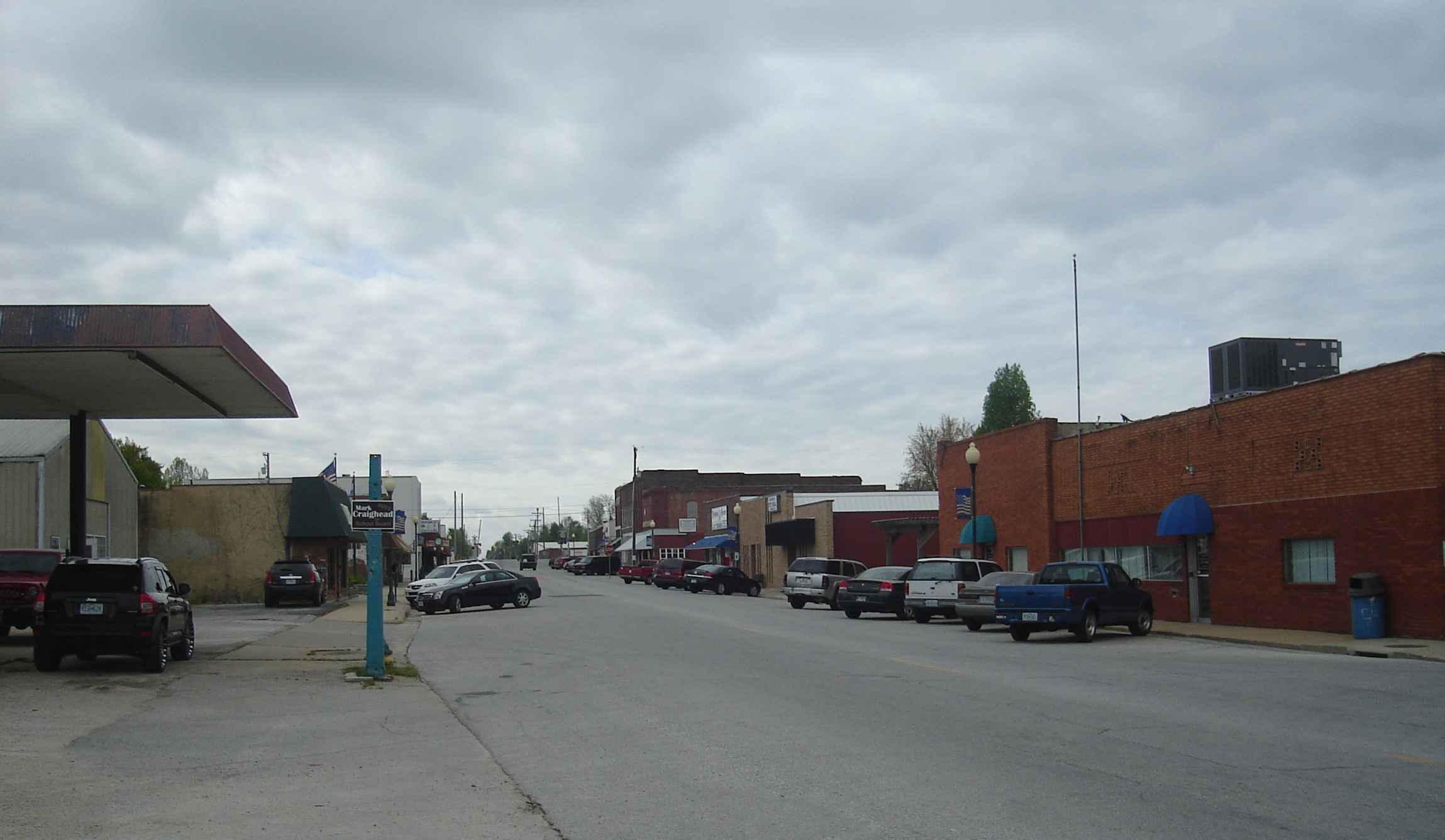 It’s the kind of urban landscape where you expect bloody showdowns, like the one between Harry Young and Mark Noe. A violent, urban scene. With antique shops flanking.

Is that all of Republic? Of course not. As I mentioned, there a number of city blocks on either side of Highway 60, some subdivisions, a number of parks my boys enjoy (freeloading, as we’re outside city limits and only pay sales taxes when we go into town). There might even someday soon be a $350 million dollar equestrian center(?).

But Republic is not what you think of when you think urban.

Here are some definite questions to ask yourself when trying to decide whether a place is urban or not:

I don’t know what the scientific number is, but brothers and sisters, if your hometown answers “Yes” to many of those questions, you do not live in an urban area. Even an urban cluster, which apparently is any collection of buildings.

So why does the Census Bureau want you to think that these are urban areas?

Consider how much money is spent at the state and federal level on mass transit, particularly light rail trains or what have you. Mass transit makes sense in a densely populated urban area, like a real city, but makes no sense for Republic. How many train stops or bus stops are you going to put to serve the widely scattered population?

Consider fuel economy mandates, the drive for smaller automobiles, and higher fuel prices. A small electric car might make sense when you only put 5,000 miles a year on a car in short trips through a city. But out in the country, your electric car might not make it to the next town.

Consider the Missouri Department of Transportation, who spends millions of dollars on dynamic message signs for urban areas. The Springfield signs spend about 362 days a year displaying MODoT public service announcements. I’ve only seen three other messages on them in the time they’ve been up. One day when it was snowing, the signs announced a weather advisory. Once, I saw a test message. But just this week I did see a message about an auto accident. This same department of transportation also spends millions of state dollars and millions of Federal dollars on sound walls to benefit urban residents who bought near a highway. But when it comes to maintaining actual, you know, roads in rural areas, say hello to tolls.

If you live in southwest Missouri, you’re used to being battered and bullied by statewide ballot initiative wherein the residents of St. Louis and Kansas City dictate, based on their consciences, the livelihoods of residents throughout the state (the recent furor over 2010’s Proposition B comes to mind, as does this musing of a now-retired Indiana farmer). Actual urbanites take vote their simple hearts according to their personal urban experience without knowing, or mostly even caring, what impact it has on the people out in the country.

Now that the Federal Government has declared that we’re all city-dwellers now, these urban solutions can be applied even more lavishly. Of course, the fiscal outlays will continue to go to the actual cities, where the votes are, but the government officials who tell themselves that they want to do what’s best will govern conscience-free, knowing that their pet urbanism applies to everyone.