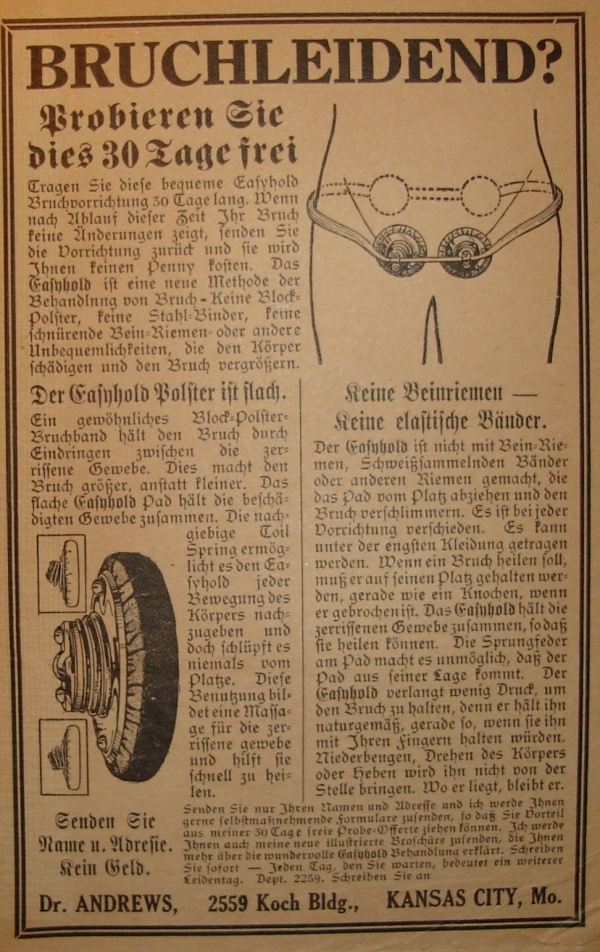 I saw this ad inside the back cover of the Milwaukee America Kalendar 1924 I bought this weekend, and it asked a question we all must ask ourselves daily: Bruchleidend?

Because if I am, I definitely need to send off to a far away city to get a set of four suction cups I can wear around my waist to help with my bruchleidend condition.

Heather informs me that I cannot suffer bruchleidend, as those are obviously a woman’s hips in it. Google’s translator tells me that bruchleidend means “break-suffering,” which I sometimes have been known to feel (if bruchleidend means “Dreading the last minutes before you have to punch back in after scarfing a submarine sandwich and a quart of orange juice in 7 minutes”).

Given the language barrier in addition to the archaic nature of the advertisement, I cannot be clear whether this was an actual, outdated, treatment for something, snake oil of some sort, or some mechanism to part German immigrants from their American dollars. As a matter of fact, given that it appeared in the back of a magazine and has a tarty line drawing, perhaps I’ve blown my PG-13 rating on my blog by including it.