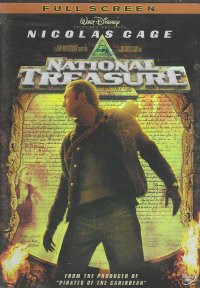 Oh, I have come to a place where I think of movies that are almost twenty years old as “recent.” I mean, this film came out when this blog was but a year old, when I was only a bit past thirty and probably didn’t even think about having children. So, yeah, this film came out two lifetimes ago, but it seems like not that long ago.

Okay, so this is Nicolas Cage as a modern Indiana Jones. He has been searching for the treasure of the Knights Templar since he was a boy and his grandfather told him the story. Thirty years later, Benjamin Franklin Gates (that is, Nick Cage) is a treasure hunter, and he is leading an expedition to the Arctic to look for a ship that holds a clue to the location of the treasure. They find a pipe whose inscription says that a map is on the Declaration of Independence–which is about as much of the movie as I could have told you before watching it (the Declaration of Independence is a treasure map). So the crime boss funding the expedition, played by Sean Bean, wants to steal it, but Gates balks, leading to a dissolution of their partnership. When Gates and his computer hacker/comic relief sidekick are rebuffed by authorities, they decide to steal it before Sean Bean can. And when they do, they follow the clues and hope to find the treasure, with the crime boss incredibly just a step behind them–and sometimes ahead of them.

So, yeah, well, it’s an actioner, so one should not expect too much from it, but it seems like lighter fare than the action movies when I was young. But, you know what? I’ve been watching some of those older movies, and they don’t have a whole lot of depth to them. If I’m looking for depth, perhaps I should re-weight my evening leisure to reading books, and not just men’s adventure paperbacks. Which this kind of resembles, actually.

But it was one of the few films lately that I watched with my boys, so I have that going for me. Although at least one of them had already seen it. As my beautiful wife has gotten a family NetFlix account so that my oldest could binge-watch Breaking Bad after her mother shared the first episode with the lad (and she a former English teacher, too), I am at risk of falling far behind on movie watching and pop cultural awareness so I must keep watching films. Besides, my to-watch cabinet is full, and I’ve taken to placing my recent video acquisitions atop the entertainment cabinets, which looks kinda junky. So my recent movie watching is actually housekeeping. Which is why I shall end this brief musing here and go watch a movie.