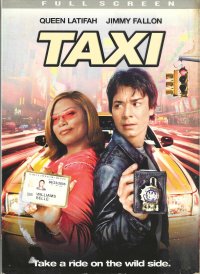 The trailer for this film appears before one of the movies I watch fairly frequently–perhaps The Man Who Knew Too Little on DVD, or perhaps Dodgeball. So I have seen the trailer enough so that when I found the video at the antique mall when I had a gift certificate to spend, I picked it up.

If you’re of a certain age and think Taxi, you hear Bob James’s “Angela” in your head.

But this is not that show.

This is a Queen Latifah movie with Jimmy Fallon in it judging by the titles; it also features a young Henry Simmons (Mac from Agents of SHIELD) as Queen Latifah’s boyfriend and an unrecognizeable Ann-Margret as Jimmy Fallon’s mother. In it, Fallon’s character, detective Washburn doesn’t drive a car well, and in the intro, his antics lead to destruction and a license suspension. When he hears of a bank robbery, he jumps into a cab driven by Belle Williams (Queen Latifah) and orders her to follow the robbers. It’s no ordinary cab–a former bicycle messenger, Williams has modified the car serving as her cab to be a racecar, and she’s a NASCAR hopeful. So they drive really fast on the trail of the bank robbers, who are apparently also models for some reason (well, they can’t all be surfers like in Point Break, I guess). Which means the leader of the band is Mrs. Tom Brady. I tried to lure my boys to watch the film, but that trivium was not enough.. And as they work together, they meet each other’s families and whatnot for some humorous set pieces.

So it has a bit of a bad reputation and rating, but it’s just a piece of early century popcorn action comedy. No worse than most, and honestly better than the Internet would have you believe.

So, about that band of bank robbers.

Why supermodel bank robbers? That’s why.