On Thursday, we picked up our packets for this weekend’s Ruck n Run, a 5.56k in support of local veteran’s organizations. It had two options: To run, or to ruck, which involved carrying a backpack with 45 pounds in it and stopping at five stations on the route to do 25 push-ups, 25 jumping jacks, 25 mountain climbers, 25 squats, and then 25 burpees.

When signing up for the event, I guess I was feeling frisky, because although I signed the youngest and my beautiful wife up for the run, I signed myself up to be a rucker. 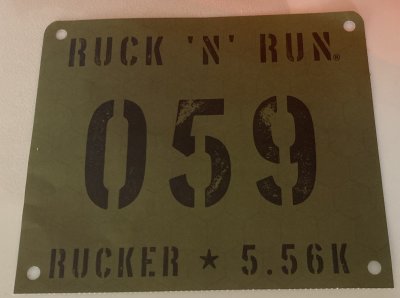 I had to run to Walmart on Friday to buy a backpack, and the event organizer wanted to collect canned goods, so I bought 48 15oz cans of chili to fill the backpack. I did the math: 15 oz by 48 is 45 pounds, and it was heavy. I started to question my sanity and whether I could actually do it. But then I realized that 15 ounces measured the contents of the cans, but the steel was something else. So I weight the backpack and took out ten pounds of chili.

And I spent Friday worrying how I would do, and if I would even finish the event. The ruck was definitely an unknown, and my training regimen has been spotty for a couple months at least. Okay, since the summer some time. I have done a couple of events–a stair climb, a martial arts testing–that gave me trepidation because I did not train for any of them.

And in all the cases, I did okay.

I started walking instead of running on Saturday morning, and I was pleased to see some other ruckers walking.

I did have a glitch: At the second station, I dropped my backpack behind me and did 25 fast jumping jacks. I grabbed my gloves and the backpack behind me and started putting it on as I was going. I got a couple hundred yards down the road, and someone grabbed me by the backpack. “You’ve got my ruck,” some humorless fellow said, and indeed, he had put his backpack next to mine, and as I was not familiar with my new backpack, I grabbed his instead of mine. So I gave the humorless fellow his backpack and ran back to get mine. On all the other stations, I put the backpack in front of me.

The course was an out-and-back course; as I came to the crossroads where my oldest was posted (a volunteer in his JROTC uniform), I ran up to him and reached out for a low-five. When he returned it, I told him we were a tag team, and he was in–as I made like I was going to unbuckle my pack. I hit the fourth station, squats, and had no problems. So I started run/walking. The fifth station was burpees, which I did in four sets: 15, 5, 3, and 2. And I ran most of the rest of the way, passing some other ruckers. I was going to sprint the final leg, especially as a trio of ruckers I’d just passed picked it up near the finish line, I dipped my shoulder on one stride, which put 45 pounds of chili on that side of my back all of a sudden. So no sprint, and I let those kids go ahead.

Regardless, the answer to “But did you die?” is no. It wasn’t even as bad as I feared.

But I really do need to get back into the good habit of getting some workouts in.