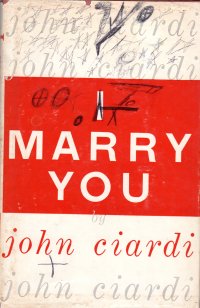 I had not heard of John Ciardi before, but he was a thing in the early middle 20th century, poetry editor for Saturday Review (ask your great grandma during a seance), director of a major writers’ conference, and host of a CBS television show. Of course, he is mostly forgotten now as poetry has fallen from public consciousness and before that because he was a “formalist” which meant his poetry was pretty good, and although he lived until 1986, the crap Beats and everything thereafter artists who infested poetry after the 1950s toppled his status.

I actually read the title poem to my beautiful wife as well as another (“For My Son Jon”, I think). So if I’m reading the poems out loud to a pretty girl, you must accept that I really, really liked it.

You can find a sample from this book, “Most Like An Arch This Marriage”, at the Poetry Foundation, and you can use it as an example of what I like: Long lines, complete thoughts, rhythm, rhyme, some interesting turns of phrase. Not as much interline wordplay as I do these days and it has the pacing and punctuation that can lead to a pompous Poet Reading instead of a street poet/poetry slam performance (although like some works by Edna St. Vincent Millay, some of these pieces could lend themselves to theatrical delivery).

I picked this book up at ABC Books at some point, and it not only rewarded me enough to continue to take five dollar fliers on poets I don’t know and might come to love, but also makes me want to find more of his work. But sixty-some years later, it’s probably hard to come by, although this hardback is in good shape with a mostly intact but inkly defaced dust jacket. Ciardi, Brian J., remember Ciardi.