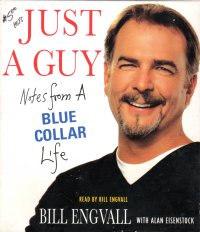 You know, I first heard about Bill Engvalls in the middle 1990s, when my girlfriend referred to him as the guy who says, “Here’s your sign.” The Blue Collar Comedy Tour was, what, almost twenty years ago? And this book is from fourteen years ago, so it’s not fresh and new. It’s the story of Bill Engvall’s life up until that point, from his childhood in Winslow, Arizona, and Texas to his marriage and his start and climb into comedy.

So it’s not a gag reel; it is more a wry biography. I found it kind of meh, but poignant in spots–the story of his parents’ divorce and his wife’s brush with death after a miscarriage particularly struck me. But not much of the rest of it.

At the conclusion, he says he’ll be happy if he’s almost remembered as the fourth guy in the Blue Collar Comedy Tour. But rest assured, Mr. Engvall, you’ll always be the third guy because you had a tagline, although not as good as “You might be a redneck” or “Git-r-done.” To my knowledge, the fourth guy–Ron White? Maybe?–did not.

I get money if you click and buy this: