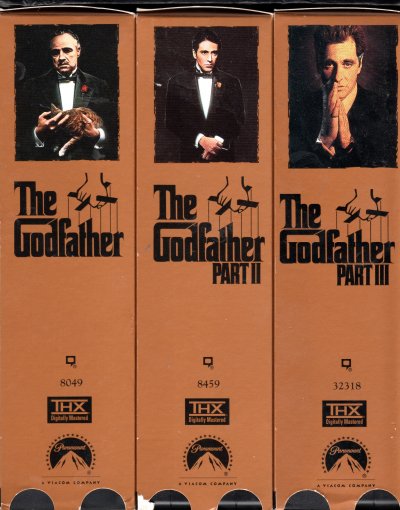 I had seen The Godfather before–my mother-in-law bought it for me one Christmas, probably hoping it would butch me up to be worthy of her beautiful daughter, and I got around to watching it some years ago. But I recently came upon the whole Godfather collection in a VHS box set with the two cassette per movie thing–what is this, laser disc? I have to stop and change the media? But I watched the films not quite back to back–sometimes not in one sitting–as my family had various excursions through the end of the summer. Once the summer vacation came to an end, though, gentle reader, movie time came screeching to a halt. Also, during this interim, the lamp on our projection television conked out, which meant I was without a home entertainment center for a week or so until replacement lamps arrived. So I got through two and three quarter movies but had to wait until this weekend to finish the set.

I’m not going to talk in too much depth about these films, as they’re nine or so hours worth of Great American Cinema, and you can find that material elsewhere. But I will remark a bit on the overall sweep of it. I see what Coppola’s doing with them. The first two came out in the early 1970s. The latter was fifteen years later, quite a gap and maybe an afterthought. I was too young to see any of them in the theaters.

In the first one, the family is emphasized: Michael Corleone joins the family business out of loyalty to the family. The movie starts, as they all sort of do, with a long family celebration scene. In this case, it’s the wedding of Michael’s sister, the daughter of Vito Corleone (Marlon Brando). At the wedding, various people ask favors of the Godfather. Then, during the course of business, some other group wants the Corleones to support their new drug trade. When the Godfather refuses, the families go to war, leading to the deaths of one of the sons and the wounding of the Godfather. Michael helps to protect the his father, which draws him into the family business. They settle scores and decide to move to Las Vegas. And Michael’s wife, to whom he’d promised that the family business was going to go legit, starts to have doubts.

The second has a twin structure: It tells the story of how Vito Corleone came to America and got into the business and the story of how the business is going in the 1950s. Vito’s father is killed by a Sicilian mafia don, and he is hidden and smuggled to America as an orphan. In the 1950s, at Michael’s son’s confirmation party, he conducts some business but someone tries to hit him at his own home, so he has to figure out who is the traitor in his midst while thinking about business in Cuba amidst the revolution and testifying before Congress. As he progresses, he loses more and more of his family: His wife admits an abortion and wants to leave him; it turns out his brother was the traitor, so he has him killed; and at the end, he is basically alone, feared but not loved, which is unlike his father before him.

In the third, Michael Corleone is older; still hoping to become a legitimate businessman, he has become a philanthropist. The opening scene is not a family gathering, but an event to celebrate Michael’s awarding of a church award. He offers to help cover up a Vatican financial shortfall by buying the Church’s stake in an international real estate company, but as it turns out, it’s all a boondoggle. Meanwhile, a hungry young mafioso wants his cut, and a young hothead, his brother’s illegitimate son, wants to join Michael. Intrigue, and then bloodletting, it follows the pattern of the others, except that Michael, haunted by the decision to kill his own brother, has to watch his daughter die as the result of an attempt on his life, and the very last scene is an elderly Michael dying alone.

So the story arc is not a pleasant one for Michael; he ends up in the business to take care of his family, but he ends up alone, alienated, and not particularly liked to say nothing of loved. It’s a tragedy with violence in it, a Hamlet where Hamlet does avenge his father, and it’s not ever over.

So I’m pleased to have watched the whole set (and not just relieved, unlike reading a Stephen King book). But some parts of it, particularly the opening scenes of the family parties, run on and on, and many of the other scenes run on a couple of beats too long.

The picture, though, was very good for a twenty-some year old set of videocassettes. Of course they put them onto two cassettes each so they could record them slower, at higher quality. The videocassettes also include commentary from the director, writers, and actors before the feature. I watched a little bit of what they were saying before the first film, but it’s the self-indulgent, self-important stuff you get from the Serious Cinema Critics–and I don’t like to read the introductions to classic literature to know what to think of it before I’ve read it, either.

So I’ve quoted the movies on a professional call in the last couple of days, and I am refreshed on the lines from the movie to drop into conversation. Which will be relevant to other old men.