The front page headline of the New York Post story is misleading: 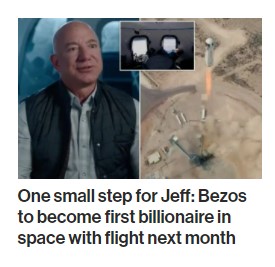 After all, some of who are not headline writers are old enough to remember Dennis Tito.

Inside, the story itself is titled Jeff Bezos to fly on Blue Origin’s first crewed spaceflight next month, and the record-breaking claim is a little more measured:

Barring surprises, the trip would make Bezos the first of the billionaire space tycoons to travel to space through their own companies. Elon Musk, founder and CEO of SpaceX, and Richard Branson, founder of Virgin Galactic, have yet to ride with their companies to space.

Which is a much smaller circle, but slightly less click- and snark-worthy.