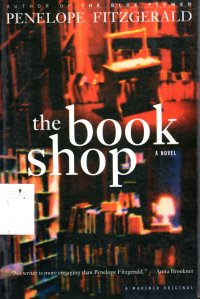 I picked up this book right after High Fidelity because that book features a protagonist that owns a record shop; this one, presumably, was about someone with a book shop. I was even willing to forego a book tied into a film for this connection, but as it turns out, this was made into a film in 2017. So it actually is a book with a movie tie. Whoa.

At any rate, this book, too, is set in England, albeit the northeast of England. In a small town, a retired widow wants to open a book shop in a building that has been abandoned for many years but that is several hundred years old. However, a noveau riche society matron had hoped that building would be the town’s arts center, under her leadership, someday, so she sets out to thwart the protagonist. After a number of incidents and third person interactions with the quirky characters of the small village, the bookshop closes.

The book was first published in 1978; I have the first American paperback edition from almost twenty years later; and twenty years after that, the movie came out. So I was expecting some twist or theme that would have made it a college literature staple, but I’m not sure it ever comes. Reports indicate that the big twist was that she stocked Lolita when it was controversial, but this is really underdeveloped. But it is a British book, a book featuring an older British woman (which I found reminiscient of The Handyman written by a different Penelope). It’s only 123 pages, but it’s fairly dense third person narration in the British style, and not in the fun Dickens sense.

I only flagged one thing in it, the motto of the olde riche family whose last member, and elderly man, supports the book shop owner. The family motto, above the door of the manor, is Not to succeed in one thing is to fail in all. That’s a pretty grim motto. It does make me realize that, although I have named my houses, I have not come up with a proper family motto. So I will give that some thought, and then I will probably make a wood burning of it. But nothing as dispiriting as that one.

At any rate, I shall turn my attention to American movie and television books between chapters of David Copperfield for the near term and will try to avoid books with elderly British women not named Jane Marple from here on out.