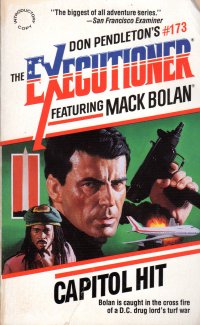 Actually, the Capitol with ‘o’ means the building where Congress meets, at least until the new administration dismisses them (I kid, I kid–but it’s gallows humor). This book does not deal with Congress, so it should probably be Capital Hit, but that does not clearly indicate Washington, D.C., on the cover. So we get a possibly intentional mistake. In the 1990s, I suppose we could give adults the benefit of the doubt. Ignorance as the default is yet to come in the 21st century.

Mack Bolan returns to Washington after a plane containing a Vietnamese actress is shot down with a Chinese-provided anti-aircraft missile. I think the point is that the Chinese are providing materiel to a Jamaican drug gang in exchange for a couple favors, such as killing a Vietnamese actress because. Mostly, though, that’s a reason given to put the city on the brink of a war not only between the emboldened Jamaican gang and other Jamaican gangs but also law-abiding Jamaican vigilantes and CIA-connected Vietnamese vigilantes. So The Executioner must thread the needle of conducting his operations often with a member of one or both of the ethnic communities along.

So, again, we have a more complex plot outlined which could have built a more modern thriller but executed with the touch of someone experienced in writing straight ahead men’s adventure novels. So, again, we can see how some things were stubbed out that were not exploited fully. Of course, exploiting all of the potential plots and subplots would probably push the book to a modern thriller’s 300 or 400 page length, so it’s just as well that we don’t get the full treatment on all of them. If only the author could have toned down or eliminated some of the groups, though, the book would have been tighter. But perhaps part of the contractual obligation is to follow the provided outline completely, so much like in modern software consulting, you get a result that meets the contract but not the best possible outcome.

Still, my march through the Executioner series continues, sometimes more doggedly than others.