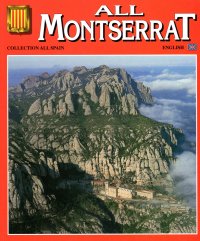 This book describes the Montserrat monestary just ourside of Barcelona, Spain. The monestary complex sits upon a mountain that has a rather distinctive shape with multiple rock features with individual names; the first part of the book describes its formation and how the natives named pretty much every rock on it over the millennia.

The book then talks a bit about the religious buildings that have been on sight, which includes a couple of churches, monestaries, and hermitages amongst the rocks. However, given how long the site has been given over to religious use, the buildings on site and all the workings are of relatively recent vintage as they suffered in various wars, most notably during Napoleon’s time when they razed the whole site and carried everything off.

Everything except the Morenta, the Dark/Brown Virgin statue which was hidden away and is in place today. So aside from a few ruins in the pictures and some of the art collection, the buildings, the gold and silver work, and even the crypts tend to be a hundred and fifty or so years old. Which, I repeat, is odd for such a historical site, but history has not been kind to the particulars of the location.

As this is a European book, the contents are in the back where the index should be, and although it reads left to right and front to back, it’s only in the last pages that one realizes that this is not just a historical site but also a tourist complex that features hotels, apartments, a couple restaurants, a couple bars, and a market. So, feasibly, one could live there. I am not sure whether the apartments cater exclusively to pilgrims and the penitent. But I did notice that some of the rooms are only (according to the Internet) about $100 a night, which is about what it costs to stay in Poplar Bluff.

So I’m not saying that I’ll be in the area for sure someday, but you know what? It might not be too bad to visit some of these places. When I am old and will not enjoy them as much as I would now, where I still like to climb and run the hills. But unless that Publisher’s Clearinghouse entry that I just mailed turns out to, finally, be a winner, I don’t expect that I will be visiting Montserrat before I turn sixty.

Although the island in the Caribbean with the same name is closer and probably less expensive overall.

Maybe I will be ready for a traveling vacation next year if such things are available.