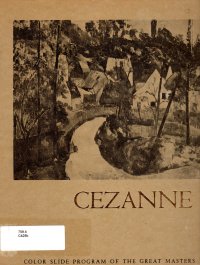 I just read the book on Marc Chagall and didn’t care much for it. Cézanne is a generation earlier than Chagall, a contemporary and exhibitor with the Impressionists, and he differs from the Impressionists and especially the later Impressionists in his depth of representation–which means he doesn’t quite treat the canvas as a flat thing to look at instead of to look through.

Still, later he gets into some strange perspectives, and the text indicates that he is a forerunner of Cubism, so he has that going against him.

Like the Chagall book, this one has black and white images along with 20 slides that are five years younger than the Chagall slides, but they have also faded to red. I have to wonder why these slides are so much more faded compared to other slides I have inherited or bought at church garage sales.

At any rate, I like Cézanne better than 20th century painters, but I’m not sure I’m going to find anything of his to put on a wall in place of a Renoir print.

I noted two things in the book:

By 1870 Cézanne had been painting for nearly a decade, though without any kind of critical or public recognition. Still, he persisted, dividing his time between Paris and his family’s home in Aix

I guess that’s not quite Nevertheless, she persisted but you can see that basic formulation was out there decades ago.

Also, I could have written this:

On the other hand, Cézanne’s decision to separate himself from impressionism had an intuitive rightness about it. He once said that he “wanted to make of impressionism something solid and durable like the art of museums.” His remark was directed at an aspect of the style that began to appear toward the end of the 1870s, when impressionism increasingly became a style of dissolution. That is, it tended more and more to lose the illusion of three-dimensional space and of plastic, three-dimensional figures. The “losses,” however, were not intentional; they resulted from a natural process whereby the painters who invented impressionism conscientiously pursued the basic implications of their own method. As they sought to capture the effects of light falling on objects, their brushstrokes became increasingly divided and their palettes became increasingly varied. The surfaces of the things on which natural light settled assumed the greatest importance. But as the assault on surface and light continued, the impressionists’ pictures tended more and more to dissolve into a haze of flickering color incidents. Deep space and solid figures were forced out of the paintings, which became decidedly flatter than they had been at the outset of the movement. In addition, the gestural surfaces of the paintings compelled an awareness of the artists’ tools, particularly his brush and pigments, which gradually accrued interest in and of themselves instead of serving an illusionist purpose. In part, this development is the paradox of impressionism: conceived as a modern version of an Old Master premise–namely, that paintings are windows through which we see fictive images of the visible world–it eventually repudiated the Old Masters by proposing that paintings are discrete objects whose surfaces are to be looked at rather than through.

Which is pretty much the thesis that I’ve kind of developed to describe the breakdown of visual art and even literature/poetry in the 20th century, and I’ve also often suspected that the Impressionist movement proved to be the point where it all went wrong. So I guess it’s been noticed before I mentioned it.

Although the author of the book is the sort of person who writes books about artists, so he’s cool with the new things.