In an article wherein the “journalist” says he has recently rewatched all of the Dirty Harry movies (possibly for the first time), he characterizes a well-known scene thus: 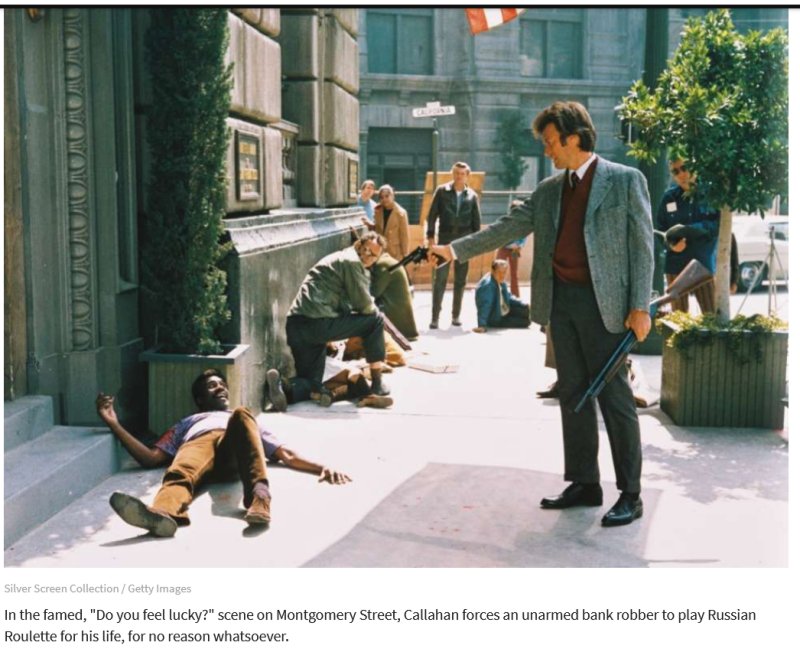 In the famed, “Do you feel lucky?” scene on Montgomery Street, Callahan forces an unarmed bank robber to play Russian Roulette for his life, for no reason whatsoever.

Dude, did you even watch it?

So at no point did anyone play Russian Roulette with an unarmed robber. Callahan faced a bank robber who had a loaded gun in reach even though he knew his own gun was empty.

In the “journalist”‘s defense, it was the first movie in the series, and if he made it all the way through The Dead Pool, I know what you’re thinking, ‘Did he watch ten hours of Dirty Harry movies or only nine?’ Well, to be honest, it’s a lot, and this was from the beginning. But he could have checked YouTube before making the assertion.

Or maybe the audience of SFGate.com wouldn’t know the difference, by and large not being Dirty Harry or Clint Eastwood fans.

Also, yes, I asserted by and large San Franciscans of the twenty-first century are not Dirty Harry fans without a “scientific” study (read: survey) to back it up. But it’s probably true.