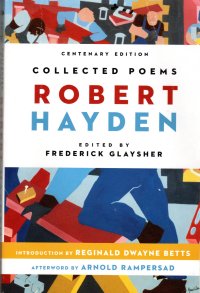 I bought this book based on the poem that Neo posted last Father’s Day, “Those Winter Sundays”. I won’t repost it here so as to make you click over to her blog, but the poem spoke to me as I am a father myself and know something of love’s austere and lonely offices that, perhaps, my children will appreciate some day.

I think it’s probably the best poem in the collection, or perhaps it’s the one that spoke most to me. Hayden was active between roughly the late 1940s and his death in 1980. His last new collection was published posthumously in 1982. So we see quite a run through 20th century poetry styles through his career. His early poems feature lines of poetry, but then we get into the more modern couple of words of poetry per line. He sometimes goes into the Black Experience, which is something with which I cannot identify as I am not Black, and this is different and a little distant contrasted with poor urban upbringing themes with which I can identify. But he does not dwell exclusively on racial themes.

Hayden’s career overlapped a bit with that of Langston Hughes and Edna St. Vincent Millay, but you can see where he breaks with traditional forms of poetry that they espoused and went with the more modern stylings. And you know, gentle reader, which style of poetry I prefer.

So it took me a while to read it, off and on, but I liked it enough. He does a shout out to Paul Laurence Dunbar, another poet I have heard about somewhere–I have his Wikipedia entry bookmarked from some earlier encounter so I can write a historical profile of him sometime (although it has been bookmarked so for years, so don’t expect something soon). He also does a poem about Phyllis Wheatley, the first black woman poet to publish a book. So some elements of the book educated me beyond the poetry.

So a better than average collection. Although perhaps it’s just better than the average of the poems I tend to read.