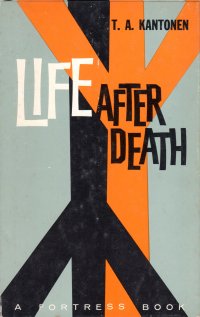 This book is a short (54 pages) theological explanation of the (or perhaps a) Christian view of life after death based on Biblical texts. It talks about what life is, what death is, what happens at death, and what happens in the final reconciliation / resurrection.

He definitely explains the monistic Christian idea of the soul+body combination versus the dualist notion that the soul exists outside the body and takes issue with the common conception that someone who dies goes immediately to Heaven and then talks about the resurrection of the body (and soul). So it runs a little counter to popular sermon fodder and populist notions of life after death.

The author draws upon biblical sources but also classical literary sources (Shakespeare, Tennyson, and Matthew Arnold) along with theological sources and delves into different philosophies such as Platonism, Aristotleanism, and Existentialism to contrast them to Christian thought and explains how different translations of Greek texts have led to the popular misconceptions. So it’s a heady and literary work, but it’s not academic–the mentions of these other sources and philosophies are kind of pointers toward more examination rather than requiring esoteric knowledge of others’ footnotes to understand this work.

Personally, I contrast this book with its learnedness but targeted to common laity circa 1962 with common Christian best-sellers of today, and I find them lacking. Even though I have not read a bunch of them, they’re a bit contemporary self-affirming from what I said, whereas this is deeper. Not quite the Tillich (alluded to in this book), but scholarly enough.

Oh, and another thing. I flagged a mention in the section of What Is Our Relation To The Dead regarding ESP:

The depths of the human heart and the experiences to which they lead must not be treated lightly. In our day research in extrasensory perception has indeed afforded remarkable insights into the potentialities lying in personal relations, far exceeding the ordinary. But the exploration of that experience and the determination of its genuineness must be left to the psychologists. The concern of Christian faith is man’s relation to God.

You probably don’t get many such references in contemporary works to ESP as being possible and not necessarily demonic, either.

For some reason, when I bought this book at St. Michael’s book fair in Lemay in 2009, I thought it was a play. Which would have made it fit right in with the drama I have been reading to start the new year.