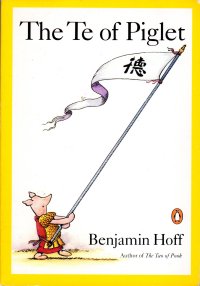 It’s been two years since I read The Tao of Pooh, and I mentioned I had this book around somewhere, maybe. I’m not entirely sure if I found it or if I bought it in the interim, but its absence on the Good Book Hunting post in the interim suggests the former.

Like the predecessor, this book seeks to illustrate Taoist thought through a whimsical mash-up with Winnie-the-Pooh stories. The title character in this case is Piglet, who is small but Taoism would suggest (as the book asserts) that he is the right size. So we get a little of the author interacting with the Pooh characters, a little bit of text from actual Pooh stories, and chapters on different personality types demonstrated by the Pooh characters and how they’re not properly Taoist (Eeyore is too negative, Tigger is too positive, and so on). We get helpful quotes from other sources, such as Henry David Thoreau as well as actual Taoist thinkers.

It’s okay; a little less informative than The Tao of Pooh and a little more, erm, practical and contemporary in its descriptions of kids these days and how modern life isn’t very Taoist. He foreshadows a bit when he laments about the government whipping up a frenzy to remove the foreign tyrant of the day. Looking at the publication date, we can tell that this was Saddam and the first Gulf War (Desert Shield/Desert Storm).

Then we get to page 214, and we get completely into how the Republicans are going to cause the Taoist apocalypse through their rapacious greed and desire for profit/conquest. No, really. The harms done by Reagan, G.H.W. Bush, and their supporters were going to cause Nature, the Tao, or the Nothing to violently respond and swing the pendulum back the other way towards harmony. Perhaps that was the election of Clinton later in the year. Maybe we’re still due for a reckoning, since we had George W. Bush. Friends, the narrative sucker-punch gained precedence in the early 21st century when authors dropped in unwarranted political commentary in books to prove they hated Bush like any right thinker would. This one comes from a decade and a whole Bush earlier.

So, yeah, I can see why this book would not have been as popular as its predecessor.

An easy enough read, but the author’s interactions with the Pooh characters detracted from it in spots, such as the introduction of a, what, mob-connected hardman, into an otherwise engaging exploration of Taoism. Well, engaging when it wasn’t completely off-putting with a misplaced and misguided tirade.