I might have mentioned that I have an aunt who might be terminally ill in St. Charles. I have been remiss in visiting the St. Louis area and seeing her in the last ten years since we bought Nogglestead–I might have been back only two or three times–so I have been inventing excuses to drive to St. Louis as she would disapprove of me making the trip solely to visit her.

A couple weeks ago, the family and I traveled to see our first Blues game as a family.

This week, my polite fiction was that I was going to see Janet Evra perform.

I just happened to visit my aunt for coffee and with my brother, who up to see my aunt at the same time.

“Are you really going to see this jazz singer?” my other aunt, the caregiver, asked. 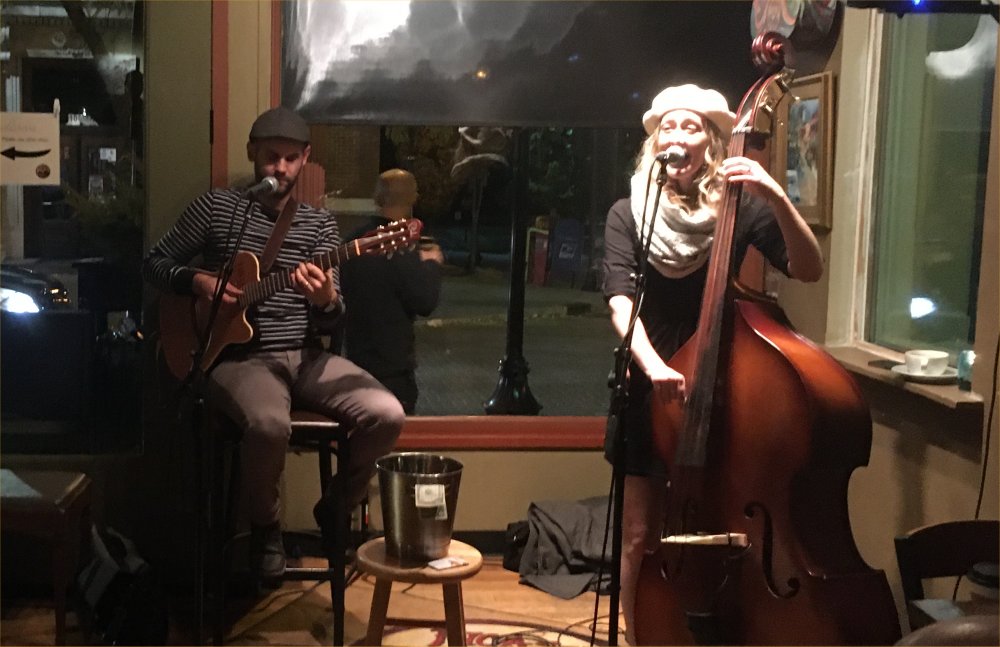 Unfortunately, it has taken my aunt’s illness to shake me out of weekends of doing the same old, same old martial arts-book signing at ABC Books-nap-chores-dinner-reading-church-nap-football/chores-dinner-workweek cycle that has seemingly consumed a better part of the last decade. That oversimplifies it, but honestly, when I look back at what I’ve done lately, that’s what I see.

At any rate, Evra played two sets, about two hours, in a coffee house with seating for about thirty–and those seats were full. It seems odd to me to see her in a coffee house–I mean, in my coffee house days, I saw a lot of coffee house musicians, and I even got a CD from one later, but in this case, I’d heard the artist on the radio and got her CD and then saw her in a coffee house which seemed backwards. Unnatural. As though by CD and radio time, artists should be playing halls. The Focal Point at least (although I have not been to the venue since it moved from Webster Groves because Memories part of Coffee House Memories).

She played a couple of oldies jazzed up (“Will You Still Love Me Tomorrow” and, I hate to say it, Blondie’s “Call Me” is an oldie), a couple of pieces from her album (“Paris”, “You or Me”), and many selections in French and Portuguese (including “Agua de Beber”) and assorted Sambas (“The Girl from Ipanema”).

I enjoyed it, needless to say.

So, Brian J., how’s your concert musical balance? you might ask. Well, gentle reader, my concert going tends toward septuagenarians (Gordon Lightfoot, Herb Alpert), women my wife likes (Dar Williams, Mary Chapin Carpenter), and jazz. I don’t go to many metal concerts because, to be honest, metalheads intimidate me, whereas I am pretty sure I can best one or more jazz concertgoers in unarmed combat. Which is a misconception that will likely lead to a future butt-kicking by a septuagenarian at a jazz concert.

2 thoughts on “The Polite Fiction of Janet Evra”