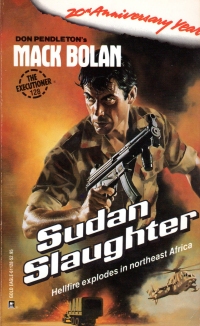 Well, this book reverts to the mean of Bolan book quality after War Born.

In it, Bolan is told to go to Sudan to rescue some journalists being held by a Libyan puppet government only recently installed via coup. Bolan accompanies a retired general who is going to be an unofficial liason with pro-American rebels seeking to depose the current government. When presented with evidence of a Libyan-sponsored chemical weapons program, Bolan decides to destroy the program and coordinates the rebels’ attack on the existing government in the process.

I mean, it’s got some twisty plot stuff, but it’s handled less than adeptly. The retired general character is just an appendage, a savior in a couple of situations and a wounded person Bolan has to take care of in others. Bolan and the general are inserted by air drop, but the amount of equipment that Bolan comes out with (two different crossbows? Really?) makes one wonder if he has a Bag of Holding. I can’t help wonder if the book was influenced by Ikari Warriors as Bolan hops into a number of piece of Soviet equipment, including an armored human resources carrier and a tank, and operates them immediately.

The book did not encourage me to immediately read another in the series, but it wasn’t bad enough to make me swear them off forever (which is a good thing, as I still have 32 ever-thickening titles in the Executioner series alone remaining on my bookshelves).