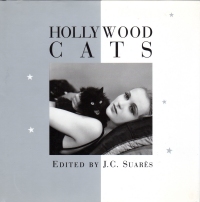 I’ve been haunting the antique malls the last couple of weeks, looking for gifts for different people, and I’d seen something I thought I would pick up last Sunday at Ozark Treasures, a cat-themed game, and I thought it would be good for a friend, but we’ve already taken care of that particular friend this year, so I let it go. But I thought of another friend it would be perfect for, so I returned Friday to look for it. But I didn’t find it. Instead, I picked up this book, which is also cat-themed and would be a good gift for either of the aforementioned friends. But in a stunning turn of events, I decided to keep it because I also like cats.

The book is a picture book of classic through the middle 1980s stars with cats, and there’s a caption telling you who it is. Most cats appear only once, although Morris the Cat and Orangey, who appeared in several movies, appear more than once. We’ve got the cover woman Carole Lombard, we’ve got Marlon Brando, we’ve got Sigourney Weaver with the cat from Alien.

It’s an interesting book to browse mostly if you’re in the intersection of old movies and cats like I am, and, in retrospect, only one of the friends to whom I thought to give this book. So perhaps it’s for the best that I kept it after all.

Although I could, I know, give it away now that I have read it. But that would be most unlike me of all.