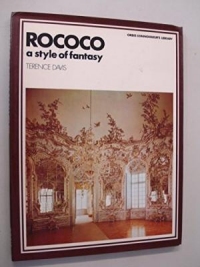 This would have been a book to browse during football games, and indeed, that was the goal last year when this book ended up on the table beside the sofa. However, the text portion of the book is dense at the front of the book, chock full of designer names as it creates a slow-to-read name-checking evolution of the rococo style in France, Italy, Britain, and Germany. Only then does it really go into the photography illustrating the rococo style as it is.

So it lounged on that table for almost a football season and a half before I moved it over to the table beside my reading chair for some attention amid the longer work I’m reading (to be announced probably a couple weeks from now; it’s that long).

So what do I remember from the book?

Rococo followed Baroque style in the late eighteenth and early nineteenth centuries, peaking in France but with some elements appearing in other countries. It, like Baroque, is elaborate and rounded, but it’s more whimsical than its predecessor and influenced a bit by the contacts with the Orient. Also, aside from some of the sculpture, maybe, it’s not for me.

Which is more than I knew before I read the book; all I knew of Rococo before it was the Rocky Rococo pizza by the slice chain, but I am from Wisconsin (where the chain is based). Which is, really, what I hope for when I glance through these things: A short intro course on something I don’t know with information for further learning should I like a topic or style. But Rococo ain’t it.