It was a busy Saturday, as so many of them get to be.

We started out before dawn to run the 2017 Habitat for Humanity Home Run 5K at 7 am. Our boys are on their school’s cross country team, but as it is a small school, they do not participate in meets with other schools. Instead, they run in 5K fundraisers every autumn, and the whole family runs in them. It looks like the Springfield News-Leader‘s photographer was on hand to take pictures.

She did not get any of our crew, though, and the official event photographs are not online yet, so I cannot do my traditional Bill the Cat head swap on my picture in the event. 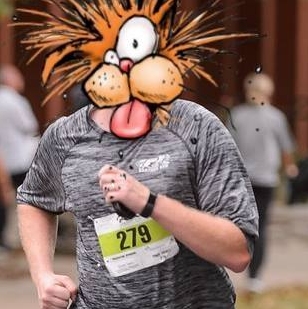 Which I do with all my 5K pictures because I tend to think I look like Bill the Cat in them anyway, as I did with the one from the 2017 Panther Run above.

So we arrived home about 10:30 in the morning, enough time for a spot of rest and a bit of lunch before I took the boys to the Ozark Mini Maker Faire where they were to man the First Lego League booth for a couple of hours starting at 1pm. They’re not just athletes; they are also scholars and participate in the robotics/programming competitive league. Again, it looks like the Springfield News-Leader‘s photographer was on hand to take pictures, but, again, none of us.

Perhaps we should have carpooled.

We got back from the Mini Maker Faire, which was more mini than it was last year, werd, in time to load our truck with some blankets and desserts to take to our martial arts school’s annual picinic (which is how autoyogibearrect spells it) at 5pm. This time, the News-Leader photographer was not on hand to take pictures–that I know of–but we had some pulled pork, chatted with some friends, while the boys played on inflatables.

We got home about 7:30. There were no news photographers to capture our return, which is good.

But I thought it was interesting that the News-Leader‘s photographer was at two events that we attended, and we’re still not on the society pages yet.

It’s only a matter of time, though, I reckon.