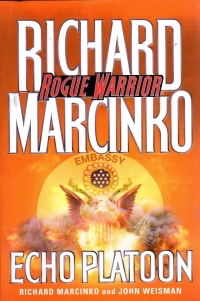 When I cracked open this book, I thought I’d read it before. It begins with a water-infiltration attack on an oil drilling platform. But as I went through the set piece, I thought, No, the other book included an assault on an oil platform in the North Sea, and this one is in the Caspian Sea. Completely different. So it’s like James Bond: Watching the movies rapidly in succession, one realizes how many of the set pieces are repeated, especially ski chases, SCUBA fighting, or the sudden large scale assaults of United States troops, astronauts, or ninja on the enemy compound.

At any rate, in this book, Marcinko is in Azerberjan to “train” the locals, but when his plane lands, he finds a hostage situation that requires the oil platform landing mentioned above. After the hostages are rescued, the convoy taking the hostages to safety is hit by tangos, resulting in the loss of all those the SEALs saved. So Marcinko investigates the connection between the Russians, the Iranians, and a questionable NGO and its billionaire founder. Which leads to a number of set pieces and assaults that you would expect, all told in the meta- and, erm, course style of the Rogue Warrior series.

How meta? Well, he talks about the editor telling him to move the story along, and he even admits

Now, this here book is pure fiction, but the sort of Warrior leadership I’m talking about can be found in real life, every now and then.

Like the example set by Master Sergeant Roy Benavidez. Master Sergeant Benavidez was attached to Fifth Special Forces back in Vietnam. Here, quoting from the citation for his Medal of Honor, is what he did–and how he led by example.

The book then relates the story of what he did.

So the book–and the series–blend the fiction with real actions and authentic government behavior effectively. I like the series overall.

However, this book comes at the end of the Clinton years, and Marcinko calls the former president out by name several times. I don’t like sucker punches from the left, so I rankle a bit about the ones I agree with, too. It not only can turn off half the audience–well, by then, the circles in the Venn diagram of Marcinko fans and liberals were probably far apart already–but it also dates the book. By just fuming about military cutbacks, you could imagine it in just about any Democratic administration instead of pegging it to something that kids these days won’t relate to.

At any rate, still a fun book to read while waiting for my thirst for Shakespeare to resume.