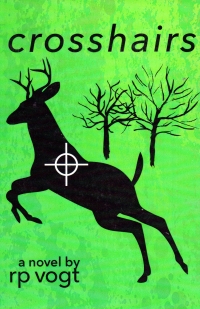 Full disclosure: when I moved from a nice suburb and good school district to the trailer park in the middle of my seventh grade year, “R.P.” was the kid assigned to be my friend to help me get around North Jefferson Middle School in Murphy, Missouri. He was a smart kid. I was a smart kid. I’d like to think we were numbers 1 and 2 in the smarts for our seventh grade class, but I might be giving myself far too much credit. By the time we finished high school, I certainly dropped a couple points in the rankings because I didn’t put any effort into my schooling, and he did. But I digress. We go way back, and when I saw he had a book, I ordered it.

This is a young adult novel about a boy (about my kids’ age) who gets to go hunting with his father, uncles, and cousins for the first time. While he’s there, he finds one of his cousins stealing from other family members, and the book deals with the fallout of that including a run in with a local hood. It’s a short book (120 pages) with none of the cartoons that are rife in the Diary of a Wimpy Kid or “James Patterson”‘s Middle School series. I’m not sure how much the book captures the zeitgeist of contemporary middle schoolers, but my oldest has expressed interest in the book, so I suppose he’ll let me know. The questions the lad has about honoring your word and doing what’s right in spite of your word are real and tangible concerns for a young man, and thematically the book works.

So I enjoyed it well enough. But I’m probably giving some weight to being pleased that someone I knew wrote a pretty good book. And, quite likely, has sold more copies of this one book than I’ve sold of all three of my books. Curses, R.P. wins again!