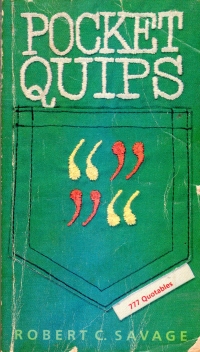 This book is a small collection of quips, anecdotes, and aphorisms collected by a pastor, presumably for sprinking in sermons and whatnot. As such, it’s chock full of faith-based meditations, brief meditations, on grace, hope, love, and morality, but it also has some secular bits, too. It’s not Poor Richard’s Almanack, but it’s not supposed to be. It’s a step up from Hallmark compilations, but that’s it.

Strangely enough, though, the Grain of Salt (GoS, a term I shall use henceforth) is high, as one of his entries on Kindergarten is “(A child’s definition.) Kindergarten is ‘a garden full of children.'” Maybe not everyone is from Milwaukee, where the first kindergarten was formed/held/enschooled, or fluent in German, but kindergarten literally means the children’s garden. I used to say this in a dramatic voice when dropping my children off when my youngest was in kindergarten.

Man, that was a long time ago.