I mentioned that I could not hear The Miracles sing “Love Machine” without thinking of chickens. I failed to mention that this commercial is my beautiful wife’s favorite commercial of all time, which will come in handy knowing that as our children like to ask for a favorite this or that regularly.

Here’s the commercial again for your reference:

Last Saturday, a boy and I had some time to kill before picking the other lad up from an activity, so we went to a local antique mall to do some Christmas shopping. Which means, mostly, buying things for ourselves and maybe a trinket or two for someone down the Christmas list.

But we were also looking to replace something in our kitchen, a print in plastic frame that we had over our sink for years, far beyond the normal lifespan of this cheap particular bit of postery that I bought at a garage sale some decade or two ago.

So after passing it, I returned to the rooster art at the antique mall, and I thought it might do double duty: I would hang it up in the kitchen and see if it flew as a replacement, and if not, it would be great for Aunt Sandy.

Also, as I did so, I did not mention to Heather that I did; I expected her to say, “Is that a …. chicken?” when she saw it. That, in itself is an in-joke: Some decades ago, when she was a comely young HR staffer for the St. Louis County government, she would interview building inspectors by showing them a series of photos and asking them to identify possible violations. One of the photos had a chicken, which was back in those dark ages, not allowed within the county. One incredulous interviewee looked at the photo for building violations, and then said, “Is that…a chicken?” which my then beautiful girlfriend beautiful then-girlfriend, now-beautiful now-wife (::sweats the construction there::) repeated with the same intonation the fellow under interview used.

But she did not.

And, apparently, she now likes chickens in the kitchen. Art chickens, anyway. A couple of years ago, I did a woodburning of a rooster on a board and put a couple of hooks on it, and somehow it replaced a pair of paintings by my great grandmother on our dining room wall. When she saw the new rooster above the sink, she liked it (sorry, Aunt Sandy, unless you really don’t do chickens, in which case, hey, lucky for you!).

It took less than fourteen hours for the Denny’s commercial allusion to appear: 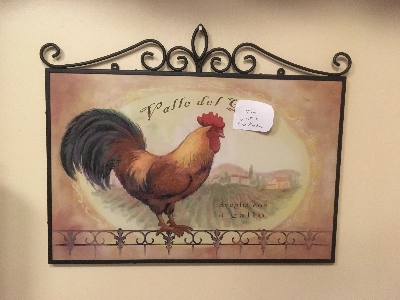 Which she also loved when she saw it on Sunday afternoon.

It stayed on the art work for the week because I was too busy and lazy to remove it, but I see that it has migrated to the woodburned rooster by her hand.

Perhaps I’ll end up being lazy enough that it will remain there until such time as our kitchen is filled enough with chickens that it can make a circuit regularly.

But I doubt, actually, that the tape will last that long. Nor her desire for more chickens in the kitchen.