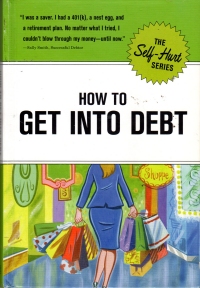 This book is a scientifically funny book. You can take a look at it, and you can see the satire within it and the quips and the proven turns-from-reality that make for humor.

However, it is also almost 200 pages of the same gag. Granted, it’s double-spaced and has a lot of sidebars with quotes about debt and financial definitions.

At any rate, the gag itself is that getting into debt is good, all-American, and fun. It talks about how best to get as deeply in debt as you can and how to strategically manage your debt so your credit limits go up without actual default. Until it all does collapse, which might not even be until you’re dead.

It might have made–and probably has–made a humorous essay, but stretching it into a book really thins out the actual funny.

A little bit of wry retrospect, though: the book was published in 2007. A year later, its tenets would become very unfunny indeed.

Unfunnier still are places where I find myself recognizing my own rationalizations and patterns of spending, such as buying expensive coffees and pastries because I was making more than the $20 a day I spent on them.

At any rate, a quick read, but probably not worth your time.

Apparently, this is part of a series of books whose titles are wry satires on self-help books. But I’m not seeking them out.