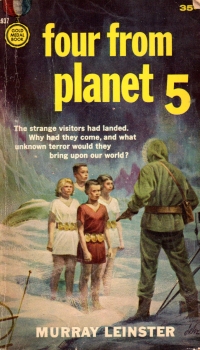 This book is a 1959 paperback. I initially thought it was by a British author because of some of the conceits and spelling (and a spot where Britain comes off a little better than the United States), but the author is an American.

At any rate: An American scientific research station records an odd event, and when investigating, the scientists (and a reporter for a women’s magazine) find a presumed spacecraft with four teenagers in it. As they begin to assemble gear to contact where they come from, a scientist destroys the equipment because he’s sure that the world does not want people from an advanced civilization showing up, what with the Cold War and all. The book then is a number of episodes where the US Government takes charge of the kids and hides them from the world, getting more and more impatient with the kids who cannot answer the questions they have because they don’t speak English well (as they learn it after they’ve arrived).

The book is padded out by the scientist protagonist updating and revising his theory about their origin and purpose as well as the government’s plan for them. Books with hard scientists as the protagonists can be risky, especially if the academic parts of science take up a lot of the novel (see also The Forge of God).

It’s not a particularly compelling book, and I enjoyed it mostly for its historical perspective as a piece of speculative fiction written in the late 1950s.

The copy I have belonged to some kid, apparently, as there’s some scrawling of–crayon? in various places, and it’s missing the title page and probably first two pages of the book. Since it was just the beginning of the setup, I went ahead with reading the book anyway, hoping that random pages would not be missing. In retrospect, that probably wouldn’t have been as bad as it might have been in other books.