Last summer, my youngest son found an English pound on a playground. But this pound had a hole drilled in it to be used as a necklace. So I resolved to make a little necklace for him using the pound.

Did I mention that was last year?

With the impulse to do something about it, gentle reader, I put it on my desk. As you know, I have a series of posts categorized Five Things On My Desk because I often have strange and interesting things on my desk for a long period of time.

To be clear, I have a huge corner desk here with a probably twenty square feet of surface area, and a couple of printers and whatnot for small things like coins to disappear under, not to mention the cubic feet of papers, magazines, unopened mail, and, what is that, a bag of AC adapters my mother-in-law gave me over the weekend for some reason? So, in my defence (as the British might spell), this little coin has been hiding under things and occasionally surfacing when I clean off the desk, only to resubmerge quickly.

But when I put three months’ of children’s certificates, greeting cards, and ribbons into binders (this is what passes for “scrapbooking” at Nogglestead), I found it again. So I thought, “All I need is a jump ring (a jewelry term because I have made some jewelry in my day, son) and a chain, and I can finally make that necklace.” Which I am sure I first thought a year ago.

But, as fate would have it, I found a gold jump ring on my kitchen counter behind the fruit bowl. Nogglestead, verily, is the Trenchcoat Schtick writ large. From whence came this golden jump ring behind the apples and oranges? I’m not sure. It could be one of the boys’ key chains elsewhere awaiting repair. No matter: The key chain is not on my desk, and the pound is, so I know which takes precedence.

So we’re off to the hardware store for a chain. Instead of a nice piece of steel links or gold links to hold it, I think a bit of light chain would be better. So I measure out 18″ of #3 in gold and pick out a connector, when suddenly I’m in a Marx Brothers (or, in my case, Marx Children) bit as Harpo pulls a chain, and it starts to completely unreel from its holder. He stops it, starts to reel it in, and brushes another reel. This reel, and one that is not close to it, start to spill their chains onto the floor as well. I hand the bag with the chain and the connector to my oldest child to hold and slowly reel in the chains. When I’m done, I find the oldest child was too cool to hold the bag, so he’s dropped it on the floor and wandered off, presumably to find sharp things to fidget spin into a hospital visit.

I pick up the bag, gather the children, and we depart. Later, I unload the bag on my workbench, and the connector is gone. I mention this to the older child, who apparently saw that it had fallen out of the bag when he dropped it, but did not mention this to me or, you know, put it back in the bag.

So we went back to the hardware store the next day to replace it. Which is something noteworthy in itself: I put the $.13 connector on the counter by itself, laid down a quarter, and got change. That will probably never happen again.

After the second trip to the hardware store, I got the chain looped in and linked, and now the laddie has his necklace. 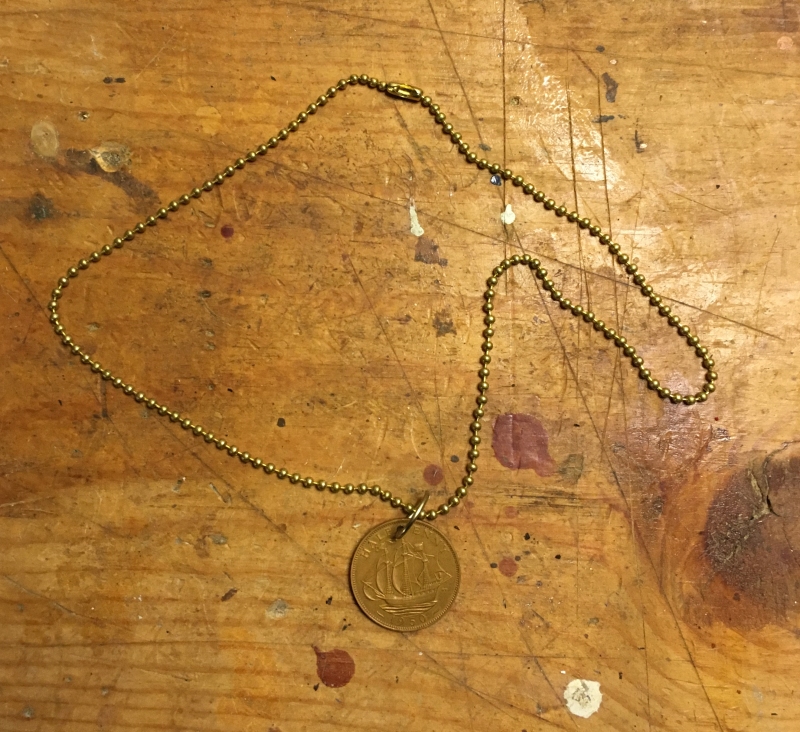 Which remains sitting on his bookshelf, because he’s not as excited about having a necklace with a British pound on it as he was, oh, say, a year ago.

But it’s off of my desk. And it’s a project completed years later, which means this post goes in the DeRooneyfication category.