So we had a good Spring thunderstorm a few nights ago at Nogglestead, and after about thirty minutes of a driving rain against the west side of the house, my beautiful wife’s office window started leaking. And by “leaking,” I mean it was as though Thor himself was urinating on her electronics. She scrambled to move and cover her equipment, and I scrambled to find what was going on. In a driving rain. Lit occasionally by lightning. This is kind of old hat for me.

Back in our Casinoport days, water got into the house by every sort of way. The walkout basement was really a dugout sliding glass doorway that looked uphill and had a single drain to relieve the rainwater. It also had two crab apple trees above it. I had to sweep that out every day to ensure the crab apples, shaped and sized perfectly to fit into the holes on the drain cover. I learned this the hard way; once, when I did not, I looked out the door during a heavy rain, and it looked like an aquarium with a really low water level. Which lead me to an evening spent in the pouring rain, bailing my walkout basement’s landing and clearing the drain every minute or so. Then there was another time when the gutter pulled away from the end of the house during a thunderstorm, allowing the water to stream off the roof into the runner of the sliding window in the kitchen, which led to the water rolling out of the runner into the dining room. I was able to prop the gutter into place with a propitious two-by-four and reaffix the gutter in the light of day.

But I had no such luck that recent night at Nogglestead: We don’t have any trees to block the gutters, and they were half-empty or half-full (I’m not sure which I should insert here to self-identify as a pessimist). Nothing was collected on the deck above the window. I didn’t see anything, but I did know that the lintels above the window could use a caulking and a painting, which I couldn’t do in the rain.

When we first moved in, the home inspector had shown us where the window and door frame below our deck could use a caulking, and right after we’d moved in, I did so, but that was eight years ago almost. So it looks as though it’s time to revisit that, and I’d put it on my list of chores for the summer that I’d get to right after reading yet another book I’m likely to not remember anyway.

So I bought a couple tubes of exterior caulk and took a look above the window instead of at the lintels. Oh, my.

That looks like something I might do. Did I do that? I don’t think so. I’ve never bought brown caulk in my life.

So I chiseled out the old mortar and pulled the old caulk out. 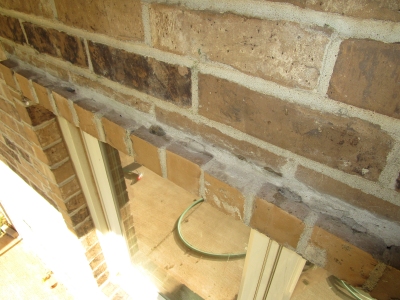 And I took steps to ensure that this never happens again. 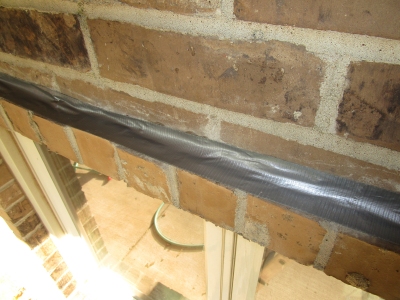 Now, back to that book I am reading. What is it again? I’ve forgotten already.

I AM JUST KIDDING! As Steven Den Beste would have said, DWL (Don’t Write Letters!) The duct tape was not a permanent solution.

Okay, here’s what happened: I bought the caulk and got on the ladder and discovered that the joint needed mortar instead of caulk, so I planned to stop by the hardware store to pick up some mortar in the afternoon before I retrieved my children from school. But as I was leaving, I checked to see if I had any brick mortar, and I did, so I just bought a bucket to mix it in and some other things at the hardware store. When I got home, I discovered I had a ten pound bag of mortar, which seemed a little overkill for that little bit, so I stretched the duct tape to provide some bit of cover in case we had a light rain that night before I got back to the hardware store the next morning after taking my children to school.

And I did buy a small bag of mortar, a little Quikrete Mix and Go bag. Which provided just enough, although I think it might have been a little dry by the time I finished patching it up.

Will it hold? Time will tell. I’m not especially sanguine, as it was my first time working with mortar. I think it will hold for the nonce, but it might break down quickly (I’m not high on the longevity of Quikrete, actually).

So it truly is a Noggle-style repair in the end: of dubious provenance and quality, requiring the purchase of tools I might never use again.

It also leaves me with a mystery: Why do I own a ten pound bag of brick mortar?

And it ushers in the spring for real: That season where I go to the hardware store for a little something several times a week.