As I might have mentioned (not so recently) that I’ve been studying Chinese history. I bought my beautiful wife a new radio receiver for Valentine’s Day, which allows her to play music from her iPhone. This allows me to monopolize the CD player in the truck, so I’ve returned to the Teaching Company/Great Courses history of China series of lectures.

I’ve been listening to an audio course on Chinese history, so something in every conversation I have for the next two weeks will remind me of something in the Han or Tong dynasties.

I heard this, and the first thing I thought of was “Flowers for Charlie.”

He included a link to an excerpt from the television program It’s Always Sunny in Philadelphia which I cannot embed, but you can see here.

It was not a flattering portrayal of my efforts to better and to more obnoxionate myself.

For example, he asked:

Anyone feel like answering this?
Interview Question: You’re placed in a group of 5 random co-workers and assigned a project. At the end of the project, how would you describe your likely contribution?

To which, I replied:

Allow me to answer with an anecdote from Chinese history.

Liu Bang was a minor law enforcement official in the Qin dynasty. One day, when he was tasked with taking some prisoners (random people) from point A to point B, some of them escaped overnight. Knowing the severe punishment he would face should he return with only part of his complement of prisoners, he told them he would set them free if they would follow him. They agreed, and he became a leader in the rebellion against the Qin dynasty. It was touch and go for a number of years as he battled against experienced military leaders before eventually besting them and establishing the Han dynasty. He’s one of the few Chinese emperors to come from the peasant class.

Will I carry the joke too far? To quote the noted Confucian scholar Ferris Bueller, “A., you can never go too far.”

Of course, a little knowing is a dangerous thing. Now, it’s entirely possible that I will in conversation use Bai Ling when I mean Liu Bang. 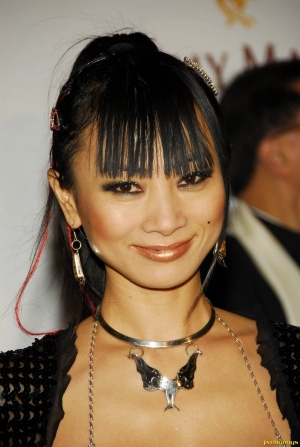 I apologize in advance. And please note that Bai Ling is not, in fact, the source of my recent Sinophilia. Thank you, that is all.

If anyone needs me, I will be having a conversation with my beautiful wife, explaining that she is more beautiful than Bai Ling. And probably a better prisoner escort than Liu Bang.

Jeez, that Social Media Headhunter guy gets me into some uncomfortable predicaments.