So my oldest son had an orthodontics appointment last Tuesday, which meant I had to pull him out of school early. After the appointment, we had a little time to kill before picking up his brother, so we stopped at Hooked on Books. If you go through the annals of this blog, you’ll find a lot more mention of Hooked on Books. Every time I came to Springfield, I stopped there. Now that I go into Springfield daily, I don’t stop there quite as often. More recently, I’ve been visiting ABC Books more often because I know the owner and because I’ve been dabbling in theological books, of which they have aplenty.

I didn’t get much, but the red dot (discounted) books always seem to attract me. 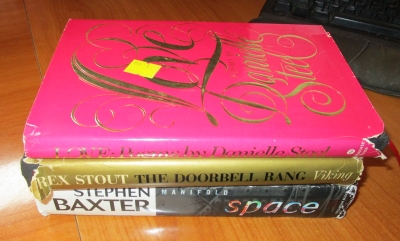 It’s not much, but if you’re keeping up with the book reports this year, you’ll see I’ve read eleven. I’ve bought three. I AM AHEAD. Until, of course, the spring book sales. But that’s a couple months away.