As some of you know, I met my beautiful wife on the Internet. Not the World Wide Web: We’re old school and met on the rec.arts.poems newsgroup. She read something that I’d posted and thought it was good, and because my handle indicated I was from St. Louis, she emailed me to ask me where one could read poetry in St. Louis. Which was a good question to ask me, as I was a frequent performer at open mic nights and could tell her where to read and what audiences in the different bars and coffee shops expected.

But I’m pretty sure the thing that sealed the deal was when I quoted an Iron Maiden poster to her.

Now, I’m a little late to the heavy metal party. I had long hair in college and listened to some hard rock at the time, but not the evil bands. Like Iron Maiden, Black Sabbath, Pantera, Sepultura, and all that. But one of the Daves I know, I know, was into that, and his bedroom circa 1990 was covered in Iron Maiden posters. Including the one for “Wasted Years”: 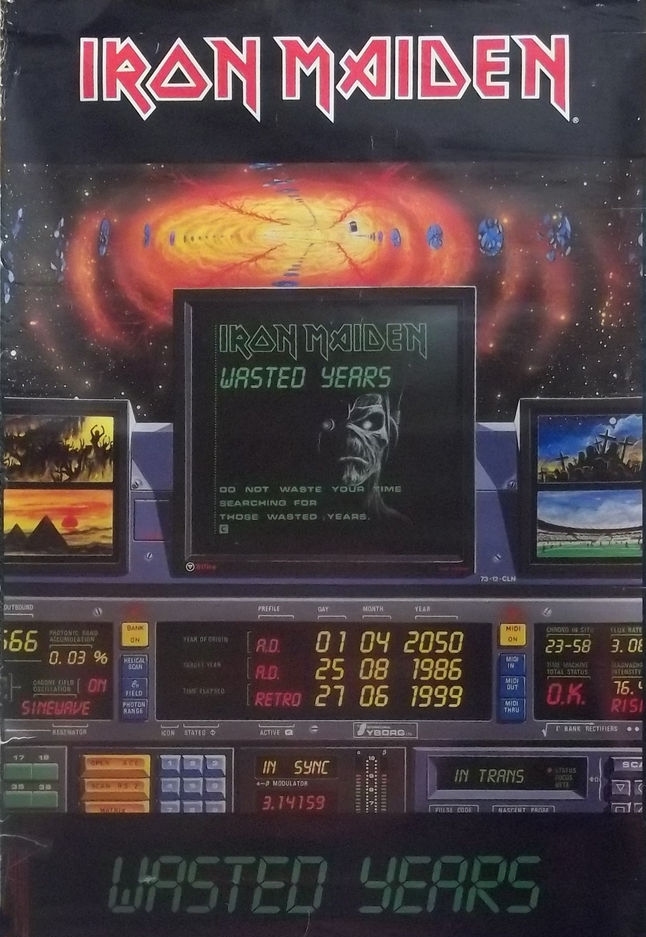 We were talking about something or other about our youth (given that we were twenty-five at the time, we were still in our youth), and I said something like “As Eddie from Iron Maiden would have said, ‘Do not waste your time searching for those wasted years.'”

That, gentle reader, Sealed. The. Deal.

You see, she was an Iron Maiden fan from way back, and she emailed to tell me that if I was an Iron Maiden fan, she was going to come to St. Louis to kidnap me. I demurred, and explained how I knew of it, but she was not dissuaded. But the points still counted on the tally of whether I was soulmate material. Enough to overcome the whole he lives in his mother’s basement thing, anyway.

So, thank you, Dave. You could never have known that your teenaged choice of personal expression in rebellious décor would help me win a wife, but it most assuredly did.

In a slightly related note, once I married the girl, I got access to her Iron Maiden collection, and No Prayer for the Dying is my favorite album followed by Seventh Son of a Seventh Son. Not Somewhere in Time, the album upon which the song “Wasted Years” appears.