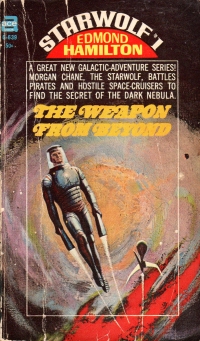 This book is the first of what would be a short series of science fiction novels akin to men’s adventure paperbacks: you have a single character, a tough guy, who gets into different missions. In this case, the Starwolf of the title is Morgan Chane, the son of missionaries who died shortly after reaching high-gravity Varna. Chane was raised there, an outsider amongst the pirates, but he grew to become an interstellar raider until a dispute over loot leads to a fight where Chane kills the leader of the space pirates. The book opens with him wounded and on the run from the other pilots. When he reaches a particular cluster, his ship is about to blow when he tries a desperate gambit to be picked up by a nearby ship. And he is. By a group of mercenaries who might need his talents. The leader knows who he is and gets Chane’s reluctant help by threatening to expose him–and Varnan spacewolves are killed on sight in most of the rest of the civilized galaxy.

So we’re off. The mercs are hired to find what weapon an opposing force in an interplanetary war is developing. They infiltrate the opposing force’s home planet, only to flee under suspicion right into the path of some starwolves searching for Chane.

It’s a pretty quick-paced action thriller kind of book; as I said, it’s akin to the men’s adventure paperbacks I tend to read, but the plot moves three-dimensionally–you never know what to expect. This book fits right into my wheelhouse–it alludes to a developed cosmological history where some group ‘seeded’ human like races in different systems, and eventually they start space travelling, albeit at different times. The warring worlds of this book, for example, have just discovered space flight, and most of their equipment is stuff they received from space traders looking for raw materials from the planets. There’s no Prime Directive here, no Terran Dominium or central government, apparently. And there are the mysteries of those who have come before (and might again).

At any rate, much like my other recent foray into science fiction (The Starcraft Archive, I enjoyed the book. The Starwolf series only ran three books, and I only have one of them. However, I have two books from the (four book) Agent of T.E.R.R.A. series also from Ace paperbacks, so I’ll probably jump onto them sometime soon.