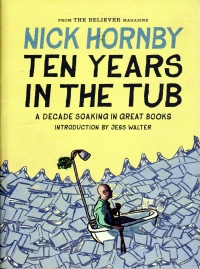 I bought this book at Barnes and Noble via a gift card because I appreciated the topic matter: Hornby, the author of High Fidelity and About a Boy, writes a magazine column discussing the books that he has read every month. This volume collects ten years’ worth of those columns.

Hey, for about the same period, I’ve been jotting down my thoughts into the blog here. Since I bought five ISBNs when I published John Donnelly’s Gold. I thought about collecting them into a volume and calling it The Last 1000 Books I Read or something like that (as you can see, there are well over 1000 book reports).

However, after reading this book, I have discarded that idea.

I mean, my book reports here are more about what I’m thinking about than substantive book discussions. Hornby’s columns are similar–he writes a bit about what’s going on in his life as he’s reading. His columns are monthly roll-ups of what he’s read and a bunch of banter about the magazine (The Believer). But. Reading one of the columns once a month or so in a magazine is one thing, but hundreds of pages of them is another. The columns became more repetitive than they would monthly. I can’t imagine reading 1000 of my book reports in a row would appeal to anyone.

At any rate, over the ten year period covered by the book, Hornby and I only read one book in common: Then We Came To The End. Our tastes do not run in common. Hornby favors biographies of sports and entertainment stars, literary fiction, and young adult books. Me, I read a bit of this and that with emphases on history and genre fiction.

The real gauge of a book review or column is whether one wants to go out and get the book(s) mentioned. I thought a couple might have sounded interesting, but before I bought them or even wrote them down, I was into the next column and set of books. The only one I considered getting from the library is the Motley Crue bio The Dirt, and that is because the book misspells Naugle’s (Tacos) as Noggle, and I wanted to see it for myself.

So I’m kinda glad I read the book (over the course of months or years). And as obsessive as I am, I compiled a list comparing what Hornby reports on in the ten years versus the books I’ve read in those ten years. You can review the comparative list here. Spoiler alert: I read three times as many books as he mentions in his columns. On the other hand, I’ve written and sold far fewer books and traveled to far fewer places than Hornby, so I guess we’re even.