It’s the election year, so it means it’s time for officials who are running for office to send out Official Communiques with four-color process and their pictures above the fold. 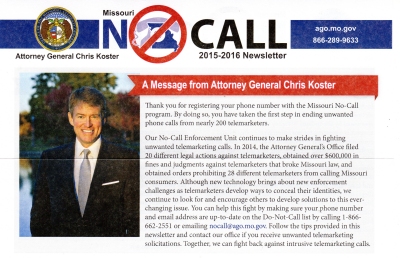 I don’t remember getting slick newsletters about how Attorney General and Candidate for Governor Chris Koster has fought to keep my phone line free of calls except for the multiple times daily I get recorded calls for…. well, I’m not sure, really, as I don’t get far enough into them to know what they’re pitching.

I’m also not sure why there are three telephone numbers on the list: My home phone and two numbers I don’t recognize (and never have had, since I’ve only had one phone number in the 417 area code in my life).

I am sure of one thing, though: I cynically believe that this mailing was sent out only because he’s running for another office and wants to (defensibly) use state money to get his face before voters.