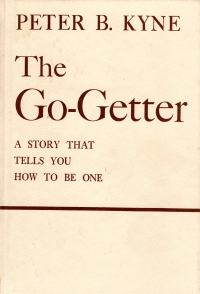 I selected this book as a quick little number to read on the road yesterday. It’s a touch under 60 pages, so I thought I could read it as a short story interlude amongst some of the heavier reading I’m working on these days. It doesn’t disappoint in that regard.

It tells the story of a lumber and shipping magnate, retired, who talks with the current leaders of the shipping and lumber companies about a debacle in their foray into trans-Pacific shipping. The head of their Shanghai office turned out to be a bad choice, and they need to find a replacement. They decide to send the senior fellow from the home office. Then, a disabled veteran of World War I presents himself to the magnate and explains that the magnate is going to hire him. The magnate learns that the vet had approached the two company leaders beforehand and had been rejected in both cases, but he refused to be dissuaded. The magnate hires him and presents him to the lumber manager; the manager and the magnate put the veteran on a sales route and task him with selling skunk spruce, a product that doesn’t sell well. The veteran returns having sold so much of it that corporate reined him in because they couldn’t produce as much as he sold. So the magnate thinks the vet might be the perfect man for the Shanghai office, but he devises another test for him: The Degree of the Blue Vase.

I won’t recount the whole sixty page story here. Apparently, this book is still popular somewhere in the business world as it’s rated highly on Amazon and is available in many editions. The fact that it is a pre-Mickey Mouse copyright and has fallen into the public domain probably helps with that.

As I read it, I couldn’t help but contrast it with the much bally-hooed Mrs. Dalloway by Virginia Woolf. Both deal with the World War I sitch and the vets returning, but Woolf’s book is so much more English, with the veteran serving only as a counterpoint to the socialite and killing himself in the end (spoiler alert). The Go-Getter is more American, sort of a pep talk for veterans of that conflict with a dash of Horatio Alger thrown in. Or maybe a heaping cup of Horatio Alger.

It was a pleasant enough read, but it didn’t make me much more of a go-getter than I already am. Which is not much, actually. For example, I only saw the film Mrs. Dalloway and did not read the book. BECAUSE I AM A SLACKER.

Can one’s predictions bear fruit, or does one need to mix it with a different metaphor?

Here’s a bold prediction you’ll find everywhere else: Amazon Prime will evolve out of its actual benefit of offering free shipping on Amazon purchases to merely streaming content and giving its members exclusive access to a box that you can see filling up as you add items to your shopping cart.

Less than a year later, we find:

Depending on where you live, you may no longer be able to receive certain items with free two-day shipping from Amazon — even if you’re a Prime member.

Amazon is testing a new program called Ship by Region, which will allow merchants to choose how far their items will ship with Amazon Prime, the company’s option for free two-day shipping. For example, a big screen TV warehoused in California might be available for Prime shipping in the Southwest but not in the Northeast.