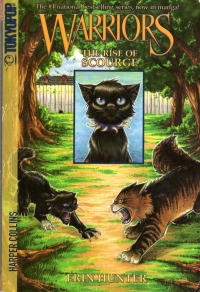 This book hits the trifecta of twee: It’s young adult fiction told in manga style featuring street gangs of cats. It’s hard for me to admit I read it, but I did.

Apparently, the Warriors series of books/trilogies is a going thing, with a house name (“Erin Hunter”), a collection of authors doing the actual writing. And in this case, illustration. They’ve hit the New York Times best seller list on occasion, although probably not the adult section that people pay attention to. The series is sort of a Game of Thrones of feline gang wars between different clans of cats and myriad personalities.

This particular volume, a stand alone in a universe rife with multi-parters, deals with the rise of an undersized cat named Tiny. Unloved by his litter mates, he runs away to the city and ends up becoming Scourge, the leader of the BloodClan. He’s the villain in other books, so this is sort of the The Phantom Menace/Attack of the Clones/Revenge of the Sith that describes his rise. And it’s not wholly unsympathetic.

So it’s not really manga; it’s a kid’s book comicked up in the manga style. But it’s about cats. Gangs of cats.

Sigh. I’m really trying to be classically educated here, but sometimes my garage sale purchases lead me down the path of modern American literature.