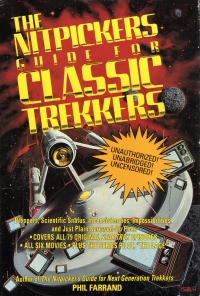 I’ve been working on this book for a number of months as a fill-in book when I sat down and had only a couple of minutes to read, so I needed something quick with short, discrete chapters.

This book is an episode guide of the original Star Trek television series. It follows up the author’s earlier work of similar nature for the Star Trek: The Next Generation series; given that the other was still on television at the time, this would have made the earlier work about the later program more relevant in the marketplace, and its success must have guaranteed at least this reviewed volume. At any rate, each episode listing includes a brief recap of the plot, a detailed list of cuts made when the episode was put into syndication, production goofs, places where the episode went against other episodes, a couple of trivia questions, some places where props are reused, and finally a list of the stills that displayed over the closing credits. Other additional chapters cover the movies, and the action is broken up with some musings on Star Trek and society as well as enumeration of Star Trek tropes.

The fellow watched both the uncut versions (as sold by Paramount in the 1990s) along with syndicated versions recorded off of television to get his cuts section and to get into the nitty gritty of the program. It seems like a whole lot of work to produce an encyclopedia of trivia.

Which I read, albeit slowly, in dribs and drabs. It, like other Star Trek titles, makes me want to watch the original series again. Perhaps when I find it inexpensively at a garage sale. Or, given that I found season 1 of The Next Generation a couple years ago and have yet to watch it, perhaps it will be some years after I find it inexpensively. But probably soon after I read a book like this.

1 thought on “Book Report: The Nitpickers Guide For Classic Trekkers by Phil Farrand (1994)”