I stopped by an antique mall yesterday. I’m not sure why I stop by antique malls, as I’m not one to decorate my home in antiques (except old books, of course). The only thing I tend to buy at antique malls is LP record albums, and the number of records of particular interest (1940 through 1960s jazz, big band, swing, and easy listening) diminishes as the houses of my grandparents’ generation empty out.

You don’t tend to find the things I like to collect in antique malls, and when you do, well….

I spotted the three Atari cartridges on a shelf with some old toys, so I flipped one over to see how much they were.

For Combat, Defender, and RealSports Baseball.

If they’d have been a quarter each, I would have bought them because I’m a hoarder as much as a collector, but $3.00 was a bit too much. That’s pricing for grandparents who think that their grandchildren might like them or for hipsters who want to repurpose (ahem, “upcycle”) them into art work or something. That’s not for collectors, who know these three cartridges are worth pennies each or two copies of Frampton Comes Alive.

I also passed up a couple of Coleco faux arcade tabletop games from the 1980s, Frogger and Ms. Pac Man, because they were priced at $48.50 each. Which is about the original retail price as I recall.

And beyond in formal antique malls and flea markets. 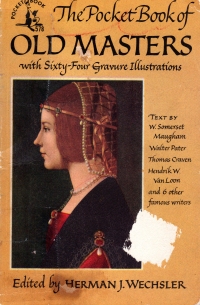 This book is a 1949 paperback. Let that sink in for a minute. It’s sixty-five years old. That’s a quality paperback. And it was in pretty good shape before I started sticking it in my pockets and sitting on it for a couple of weeks.

At any rate, this book covers ten painters considered “old masters” in 1949, including:

Each chapter includes a two-page intro by the author that talks about the text selection for each author, and then the text that follows is some writing about the author. I have to say that generally, because some of it is biographical, some of it is interpretive, and some of it is fiction. For example, for the Renaissance Italian fellows, we have some biographical sketches of da Leonardo, Michelangelo, and Raphael. But for Titian, we get a bit of purple prose describing Titian’s works in glowing and abstract terms. For El Greco, we get a section of On Human Bondage, a novel. So it’s unfortunate that the chapters are uneven.

This book also includes a number of black and white reproductions of some of the artists’ work. It’s unfortunate that they’re only in black and white, though, but given this is a little pocket paperback from the immediate post World War II period, it’s understandable. Still, the writers often talk about the artists’ unique use of color and that’s not something the reader can see.

Still, it’s a good quick summary course in these artists and could serve as a stepping stone to further interest. I’m more interested in Vermeer now and have researched him a little on the Internet to see some of his works in actual color.

So it’s an effective book, for sure, and it made me lament contemporary art museums and the elementary school rubbish on the walls there. But that happened because few enough people in the middle of the last century cared to make artistic judgments for themselves and instead let the academics and critics dictate taste. 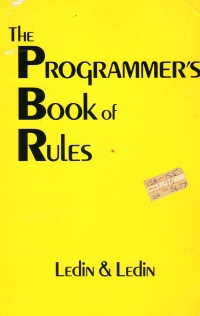 This book is really one of the last books I read in 2014, but it’s taken me a while to write it up because I’m a procastinator and because I wanted to nearly-simultaneously write it up for the professional(?) blog. But now that I’m content to recycle most of the content, it’s much easier. It’s always much easier when you just give up.

For example, first and foremost are the rules about making sure your program answers the users’ needs. Rules like:

Other rules cover interface design, such as Display results with pertinent messages which are just as relevant now as it was when the interface designed displayed only green or amber text.

Even the discussion of loops, variables, and breaking your program into sections has a sort of relevance because it discusses these things philosophically, at a high level, in a way that programming how-to books and online language tutorials do not.

It’s a quick read or browse; although it’s roughly 220 pages (which is still slim by modern, $60 computer book standards), it’s really less than that since the text is not densely packed on the pages as described above, and it’s worth the time for the insights not only into the crystallized rules but also in the recognition of some software development problems and goals predate the Internet, which I am pretty sure some of our younger co-workers don’t know.

But now that I’ve read it, I’m torn. Do I put it on my regular read bookshelves, or do I put it on the computer programming bookshelves along side twenty-year-old hardware primers and introductions to the C programming language (some of which are thirty years old)? Well, the decision is probably less philosophical and more practical in nature: there’s space on the regular shelves, whereas the computer bookshelves are tightly pressed with books I have not read. Also, they’re behind four comic book long boxes containing most of my comic book collection and a couple other boxes of paraphernalia.

So I’m definitely putting it on the regular shelves. Because I’ve read it completely, unlike the other computer books which were for reference, text books, or the hope thirty years ago that I’d be more of a knowledgeable IT professional than I actually am. Not because I’m lazy. 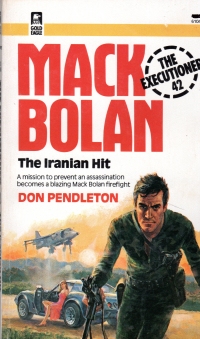 This book follows closely on the heels of The Violent Streets. I’m not sure Mack Bolan will ever get a full night’s sleep for the next forty years.

In this volume, Bolan is called to protect an Iranian military figure on the run after the revolution who has been hiding in the United States. The night before he is deported from the country, an elite squad of Iranian commandos has been dispatched to take him out. Bolan looks over the compound and finds the security is Mafia, and that the Iranian’s American wife wants out–and the Iranian is not above killing her lover in front of her to teach her a lesson.

So Bolan comes in, finds an unlikely ally in a mafia guard and that someone inside the Iranian’s circle is ultimately behind the whole thing, tipping the Iranian government off.

The pacing of the book is pretty good, mixing action and the Bolan War Journal style drop-ins a little better, but it’s still less than seamless. As these are early books written by the staff writers at Gold Eagle, they’re bound to be less smooth than later editions as the book and myth of Bolan becomes clearer. After all, none of these guys read the first forty books before writing them, and this patch of first entries was written at the same time, so the little tics each author introduces contradicts other ones.

Also, this volume identifies a possible flaw in the way the books are written. On page 91, Bolan gives his silenced pistol to the wife of the Iranian for her protection. On page 111, Bolan shoots a bad guy with the very same weapon he no longer has. Then, later in the book, a bad guy has the gun after having taken it from the wife. I can’t help forensically musing that the author wrote the action set pieces first as though they were identified in the outline most clearly and then filled in the other stuff which lead to this particular gaffe. And no one noticed it. Maybe the author didn’t read the whole book through in its entirety in its order. Perhaps someone else punched it up and added this. But this whacky error made it into the book.

Hey, I’m no saint. In my own novel (Available now!), I had an eight day week and demonstrated the old revolver-for-a-semiautomatic switcheroo. But I read the book over and over again looking for things like this, and I found them.

The Gold Eagle books are probably rife with errata like this and with other inconsistencies as authors not familiar with the character but familiar with the tropes of the genre insert them into Bolan books (as we’ll see next time).

On the whole, the series has its up books and its down books, but overall, the quality might not suffer too much from the Pendleton books, although this is yet an optimistic view in my experience and with the hopes that they straighten out a bit and fly truer. Time will tell.

For a quick lesson in the subtle differences in the language of wives, one can do as I have done and suggest home furnishings found in this catalog.

“You know, we don’t really watch that television in the living room. If we removed it and moved that beat-up old trunk with the old magazines in it, we would have room for a Big Buck Hunter HD Super Deluxe instead.” 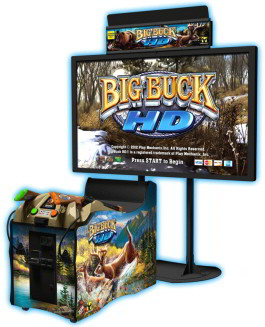 “Honey, how about a Star Wars Battle Pod? They’re only $30,000. That Extultate Justi blog guy would envy us.” 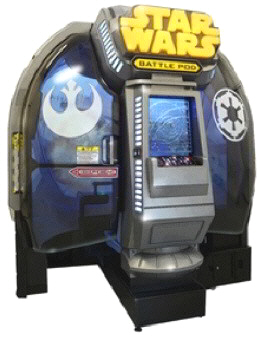 “What about a twin Mario Kart Arcade GP DX? The boys could play together.” 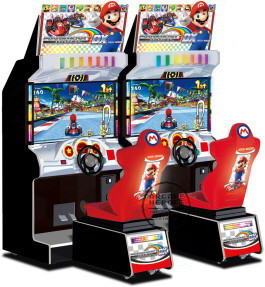 “Did you know there’s an arcade version of Jetpack Joyride? You know the boys pester you all the time to play that on your phone? If we got one of those, they’d leave you alone.” 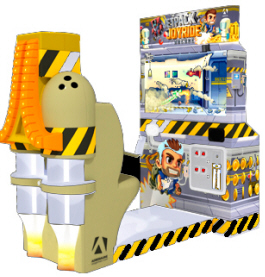 Did you see the subtle differences in these examples? Maybe not, for Wife is very inflectional language. But rest assured, each of these Nos was subtly different, conveying different shades of meaning. For instance, I am pretty sure the No response to the Big Buck Hunter was, “Maybe, if you paint the living room first and sell enough QA magazine articles.”