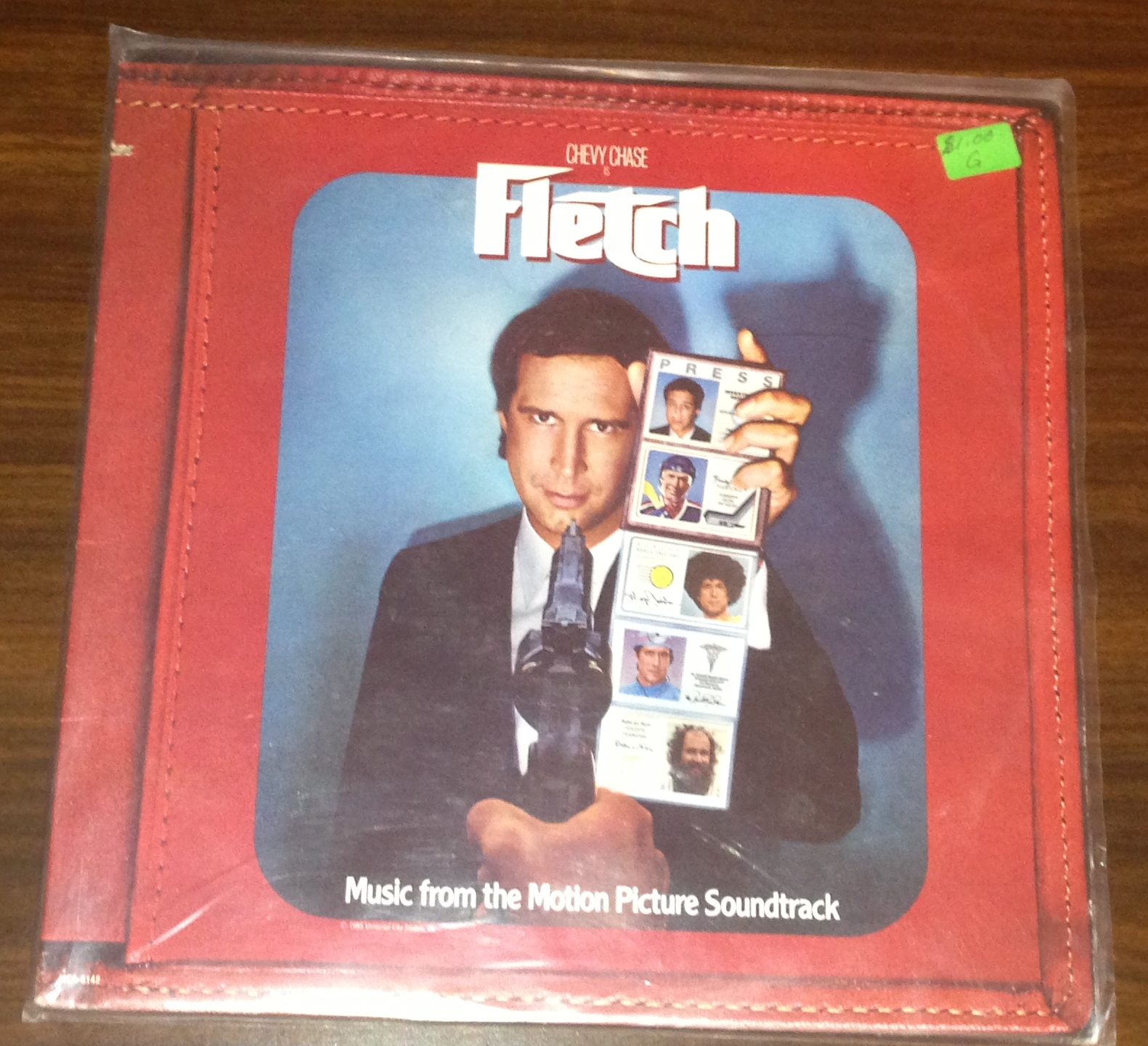 I bought this LP for a buck, probably, at Recordhead Music in Milwaukee, Wisconsin, in the early 1990s. I’d just gotten a sweet deal on a stereo with a turntable (Originally priced $20, but Gome’s mom insisted he charge me more because it had big speakers, so I paid $25 for it. After that, I bought a lot of inexpensive LPs from the era. A couple of years later, I sold it at a garage sale for about $20, but it had my copy of The Dark Side of the Moon on it, and I let Pixie, the friend who bought the stereo, keep the LP since I meant to get the album on CD. I did, more than a decade later).

Sorry, I was talking about the Fletch soundtrack here, wasn’t I?

When I bought the LP, it seemed old. Probably because it was used and it was an LP in the world where audiocassettes had taken over. But it was only five or seven years old at the time, and I’ve owned it for twenty-five years (off and on).

I bought the LP because I liked Fletch from the books, and I think I’d caught the film once or twice on cable. It didn’t get heavy rotation on my $25 stereo turntable–Billy Joel and Pink Floyd did at the time, and most of my music library was cassettes anyway.

When I graduated college and moved home with my mother, she had a large console stereo with a turntable, and since I had an English degree, I guess I expected to live there for a while, so my turntable became superfluous, and I sold it. When I moved out a couple years later, I left my albums in my mother’s custody since I didn’t have a turntable. After a while, she migrated my LPs to the garage sale bin. Apparently, nobody wanted it for a dollar, which is good, since it was not my mothers to sell. On the plus side, she did not set it on a table in her driveway the (rainy) night before the sale (unlike several boxes of my books), so it remained intact until my mother passed away and I took possession of my remaining records, her LPs and 45s, and her mother’s LPs and 78s.

After we moved to Nogglestead, we put a radio with a turntable on it in our parlor. Eventually, I brought up the LPs from the basement. We didn’t have many then–this was before I listened to LPs daily and started buying them in vast quantities at book sales, antique malls, and thrift stores. In the mornings, while preparing breakfast for our children, I’d play this album first thing in the morning.

My youngest child, three years old at the time, would come and dance to the album. Dance, to a three year old, means run around in circles while the music plays. Come to think of it, this is what dance means to me, although with more air guitar, head nodding, and rhythmic finger pointing (which explains why I am not allowed to dance). On many occasions, I’d play the LP before the child was out of bed, and he would tear out of bed, run down the hall, and begin his circling dance to Stephanie Mills before he was fully awake.

For some reason, the older brother, five at the time, started calling “The Name of the Game” the Charlie Brown song. I’m not sure why; perhaps the intro reminded him of Charlie Brown’s teacher. But his brother latched onto that and called it the Charlie Brown song for months after his brother stopped in the way the younger brother does. Where the utterance of the admired older brother becomes a badge of their alliance, where repeating it proves the younger’s loyalty to the older. Or something. Because the laddie still does it at six years old.

The other night, the younger brother repeated one of his brother’s passe quips (“Ketchup saves the day!” as the reasoning behind getting the said bottle from the refrigerator with flourish before dousing a lovingly crafted entree to make it palatable to children).

Inspired, I put the album on and recounted its history, including the Charlie Brown song.

And the younger son danced with his mother in the parlor with more sophisticated dance moves gleaned in the first grade, apparently.

So this album, just a silly soundtrack from a decent movie from a good set of novels provided a set of memories years past its social relevance and continues to provide new memories.

Not bad for a buck. Plus, it’s got a couple of fun songs from Dan Hartman and Harold Faltermeyer.