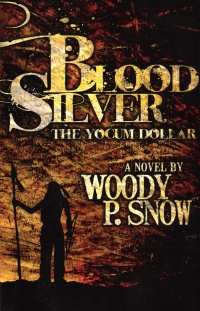 I spotted this book in Barnes and Noble while I was gorging on new books for some reason. I think I had a little time to kill, so I thought I’d go into the book store and let the children pick up a book or two, and suddenly I had a stack of books, including this one.

Woody P. Snow is a local radio personality; I catch bits of his show in the mornings sometimes. And, as you know, I’ve done a little research of my own into the Yocum Silver Dollar (well, I read Traces of Silver). I’ve thought about writing a piece of nonfiction about it, but not about writing a novel about it.

This book has a couple pages of modern day narrative to frame it: a diver finds one of the silver dollars in the lake and shows it to his grandmother, who told him stories about it but now is in the grip of dementia. Then, without ado, we go back to the beginning of the nineteenth century. James Yoachum loses his wife in childbirth, goes mad, and wanders into the wilderness. He eventually makes his way into the Ozarks and is rescued and later adopted by an Indian tribe. He wins the heart of the chief’s daughter and learns the tribe’s secret, and the source of its silver jewelry: an old Spanish silver mine. A fur company puts in a trading post, the area surrounding the trading post grows, but the citizens are left without a currency when the fur company moves out. Yoachum begins making the coins with the help of his brother and his Indian wife. All goes well until the United States Government moves in, surveys the land, and makes the residents pay for their land, and some try with the silver dollars.

It’s a decent, straight forward story, but it does suffer a bit the same way that Downton Abbey suffers: time passes, often in blocs of months or years, and nothing seems to change in the characters during the interim. It’s a minor flaw, but one nevertheless. The story ends thirty years after it begins, and at the end, one of the characters announces a pregnancy, and she must be into her forties by that time.

At any rate, I enjoyed the book.

Now, you’re probably thinking to yourself, “Brian’s read two historical novels this year set in the Ozarks. I wonder how he would compare them?” Well, friends, I’m probably the only one in the whole world who would dare compare Daniel Woodrell’s The Maid’s Version to Woody P. Snow’s book.

Here’s how they differ:

None of this is unexpected, of course, given their respective writing careers and goals. But it’s still amusing to consider comparing and contrasting the two.